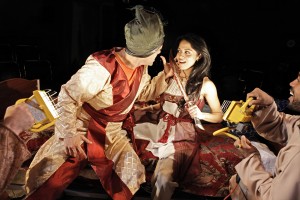 Jason Grote’s postmodern revision of the “Arabian Nights” was a big hit for Collaboraction when they staged the play’s Chicago premiere last fall, and so the show returns, after a week at Theater on the Lake, for a month-long run at the company’s new digs in the Flat Iron Arts Building. It’s not difficult to figure out why the show was so popular—it’s a heady, fresh and intriguingly complicated piece of theater—both head-scratchingly dense and cheekily fleet.

Dahna, a Middle-Eastern American woman, and Alan, an American Jew, modern-day extrapolations of Scheherazade and Sultan Shahriyar, are a couple who form the core of  a play so willfully labyrinthine as to include Jorge Luis Borges (literary figure and maze obsessive) as a character. Grote uses the conceit of nested and interconnected stories to navigate the couple’s relationship as well as draw parallels between the tales of the ancient Middle East and an imagined, post-apocalyptic present-day steeped in anti-Islamist hysteria.

Director Seth Bockley and his team commit a seemingly endless font of energy toward enlivening the script, and many set pieces, in particular the dance sequences, are inspired and even moving. And the humor, though it often feels shoehorned in, makes for some memorable moments. But it’s hard to discern a solution to the labyrinth, and the setups are too hypothetical to truly connect. (Neal Ryan Saw)