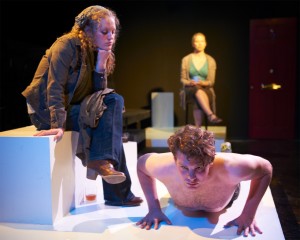 At first, the title of Simon Stephens’ play seems misleading. While “Pornography” features two transgressive sexual relationships—a heartbreaking incestuous one between a brother and sister, and a warped relationship of power between a teacher and former student—it’s less a spectacle of sex than a study of profound alienation and its manifestations both personal and political. And yet the concept of pornography turns out to be profoundly important to the disturbing themes of the play; while it’s famously hard to define what pornography is, it is almost always the displacement of bodily arousal—pure affect—for intimacy. And it’s that loss of human connection that unites stories as disparate as the vignettes that comprise the show, which ultimately asks truly provocative questions about terrorism, culpability and what humanism might mean now.

Set in the heady, volatile world of London in July 2005, Stephens’ script is elegant, sensitive, colloquial, abrasive, aggressive and abusive; and Robin Witt’s pitch-perfect direction matches the writing, with a raw but minimalist blackbox set contrasting with hanging television montages of violence and sex that bookend each scene, and intentionally fragmented vignettes of alienation writ large. The show follows, through four monologues and the two aforementioned sexual trysts, the lives of a group of Londoners experiencing the chaotic weeks that combined the Live Aid concert, G8 Summit, announcement of London hosting the Summer Olympics—and the suicide bombings on the London Underground. The fragments are ultimately imaginary portraits of those who could have been or perhaps were on the trains that were bombed. None is flattering, and all of them are moving; they’re all of “people who don’t understand their own emotions,” as one character, a morbidly hilarious and angry old woman (Maggie Cain) notes in a moment of lucidity. All are desperately isolated, and played with remarkable agility, in particular Caroline Neff as a sister who lusts for her brother while lamenting the state of the world, and newcomer Rudy Galvan as an angry teenager who violently attacks his teacher when she sexually rejects him. For people as angry and cut off from their feelings as these characters are, is terrorism the only pornography—the only thing that can get them to react viscerally and immediately to stimuli in the world? Do we need something this violent to get us to feel much at all? 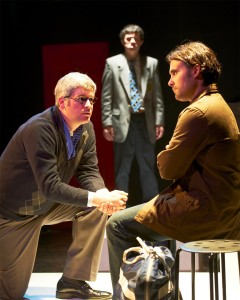 But most disturbingly of all, one of the characters in the mix, given as much face time and pathos as the others, is one of the four terrorist suicide bombers. Played with a chilling but oddly compelling spirit by John Taflan, the unnamed man describes the execution of the terrorist plan, and it seems no more morally reprehensible, inhuman, irrational, damaged than what many of the other characters in the show have talked about doing. The play seems to humanize him and dare to suggest we may be like him—asking not just “how could something like this happen?” but “how close are our actions to his?”

And yet. Across the pond, we’re living in a summer, six years later, where drawing comparisons rather than contrasts between moral actions has real political implications I’m not ready to concede; the rhetoric of comparison itself turns out to be more heavily loaded than I’ve ever thought. And ultimately I don’t think that I like Stephens’ suggestions, and I think that the issue of culpability as such is so important that I’m not ready to say, as I might have a few years ago, that we’re all equally responsible, as Noam Chomsky famously said, for doing less than we could about the state of the world. This week, for example, we’ve seen the all-too-real repercussions of supposed centrist arguments that Democrats and Republicans are equally unreasonable in debt negotiations. The fact is, there are villains, we don’t share the blame equally, and pretending that we do is a cop-out and a giving up of the highest order.

But I don’t think that kind of argument is what Stephens, Witt and any of the cast are quite making. “Pornography” is more intriguing than ideological, with a central message that’s not clearly articulated, let alone fixed, and a series of stories that doesn’t build to any kind of satisfying meta-narrative—and I suspect that all of this is completely intentional. We’re not meant to feel comfortable about any of it, even the moral of the story. That doesn’t mean it’s not the most important, and thought-provoking play I’ve seen this summer, by far. (Monica Westin)