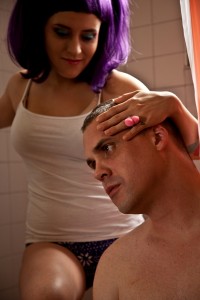 Given their moniker, it makes sense that Dream Theatre relies heavily on certain of the more psychologically oriented design elements—light and sound. Especially with the latter, that’s definitely true of this new play by Jeremy Menekseoglu, where nearly every scene is underscored by music, from Queen to theme-park songs to a German version of “My Heart Will Go On.” Pitched as a dark comedy, the play might be more accurately described as a melodrama, at least in literal terms.

Indeed the music often gets in the way of the story, which finds Matti, a German man dying of cancer, taking his girlfriend Lilli, also stricken with the disease, to America, to say one thing to the daughter he abandoned before she was even born. Menekseoglu’s script, which takes a pit stop at a major Florida theme park before getting to the raison d’etre, feels a little drawn out sometimes. But as the scenes accumulate the play offers a poignant, often affecting look at loss, regret and the inevitability of death. (Neal Ryan Shaw)