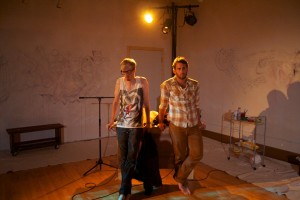 Along with the cast/co-creators, director Jay O’Berski has created an eclectic hodgepodge of a show that mixes interpretive dance, ukulele strumming, poetry recitation and a few too many dramatic Ryan Gosling impressions. The program does state that the show was developed using “‘found’ music and text” but after the third lengthy dramatic scene taken straight from “The Notebook” or “Blue Valentine” some of the creativity starts to feel a bit forced, which is unfortunate considering what a pleasantly surprising mix of emotions the piece as a whole evokes. Whether a DJ is mixing beats and intoning phrases like, “This is not an admonition of the act of kissing” or two characters are suddenly performing an a cappella Hall & Oates cover, there’s no shortage of dreamlike twists in this experimental show. Artist Sierra Dufault adds visual texture throughout by constantly painting the walls. An opening one-act unnecessarily bloats the length of the show to more than two hours. (Zach Freeman)