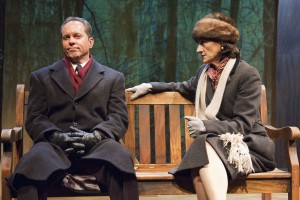 In 1982, American arms negotiator Paul Nitze and his Soviet counterpart Yuli Kvitsinsky made a radical break from sit-down nuclear negotiations in Geneva by taking a walk in the woods of Switzerland, where they hashed out a new proposal that they would bring back to their respective governments. This event is the basis for Lee Blessing’s 1986 play, which still resonantly reflects the hazards of the technological advancement of destruction outbalancing humanity’s essential desire for peace.

Blessing expands the legendary walk into a number of separate meetings, but it’s not so much the actual details of the negotiations that matter as much as the desire for two human parties to connect and see a common ground. This philosophical dance is handled delicately and pointedly by TimeLine’s production, which has for the first time ever cast a woman as the Russian negotiator Botvinnik. Janet Ulrich Brooks’ performance doesn’t fundamentally change her character’s relationship to Honeyman (David Parkes), although her suggestion that they speak “man to man” takes on a humorous bite. Parkes plays the stuffy straight man to Brooks’ congenial cynic, but this apparent two-hander is anchored by a silent third character, the woods themselves, rendered beautifully in projections designed by Mike Tutaj. (Neal Ryan Shaw)