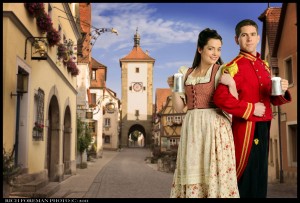 Light Opera Works actually giving us—well, light opera works—is always a special treat, given how much emphasis the company has come to place on musicals in recent years. And the only operetta offering of the season is tailor-made for the resources of the Evanston-based company: Sigmund Romberg’s delightful “The Student Prince,” which has not been done at LOW in a decade.

Part “Prisoner of Zenda,” part “Wuthering Heights” set to waltz music and frothy melodies, it is easy to forget that the work is a thoroughly twentieth-century confection that began life on the Broadway stage. It was, in fact, the longest-running show of the 1920s, with more performances during that decade than the far more forward-looking work now so indelibly associated with that time, “Show Boat.” By contrast, “The Student Prince” has taken its place as a neo-nineteenth-century operetta and there is little in the piece itself—save for its sad ending, at least by operetta standards—to suggest how recent a creation it really is.

And some things that the work chose to spotlight, notably “Drink! Drink! Drink!” during the depths of American prohibition, really were quite ironic if not downright cruel. Watching this show always makes you want to have some beers, even if you rarely have beers, and LOW could have made a fortune had it been able to sell the stuff during the intermissions. Given the work’s setting in “Old Heidelberg,” the name of the book that inspired it, and despite having been written in English, the piece forms the centerpiece of an annual festival at Heidelberg Castle.

Although director and choreographer Rudy Hogenmiller admits in the program that he had never even seen the work before directing this production, he sets the perfect tone for the piece. The sets and costumes are traditional as befits such a nostalgic work, and the energy and the enthusiasm contagious. Most significantly, the romantic leads—tenor William Bennett and soprano Danielle Knox, both making their company debuts—can both sing the piece’s glorious and familiar melodies like a dream, but also look their parts and have credible romantic chemistry between them. Dale Benson’s Lutz is a constant comic reminder of arrogant aristocracy while Bill Stone’s Dr. Engel tries to bring the prince down to earth. And the male chorus of students are a sheer joy, as is the fine orchestra led by Roger L. Bingaman. (Dennis Polkow)