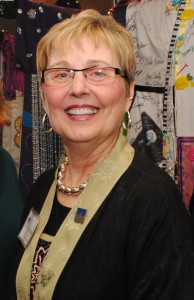 When Kathryn Lamkey directed shows at Elmwood Park High School, she would occasionally encounter a student who found their job on the lighting crew to be unimportant. “If you don’t turn the lights on, nobody can see the show,” she says. “In some ways, that’s our job at Equity. We work behind the scenes so actors don’t have to worry.” Lamkey is very well acquainted with this unseen role in theater, having worked with the Actors’ Equity Association (AEA) for the past twenty-five years. She is currently the regional director for the AEA’s Central Region (which includes Chicago), and she will retire this December after many years of working to better Chicago theater.

Before beginning her work with AEA, Lamkey was an Equity stage manager for theatrical and dance productions, a lighting designer and a schoolteacher. In her fourteen years as a social studies teacher at Elmwood Park, she also directed theater and negotiated for the teachers’ union—both experiences which would serve her well when she made the move to Equity. In 1986, she saw an ad for a position with Equity and decided to apply, and ten years later became the Central Regional Director, overseeing contract administration for sixteen states.

Her work on the Chicago Area Theater Contract (CAT) was instrumental in bringing more than a dozen new theaters under the Equity contract, and was one of her major achievements with AEA. Lamkey believes the CAT contract works for Chicago because it accommodates theaters of all sizes. “I think it’s the entry level that we allow a theater to start at and dip a toe into the water,” she says. “It allows beginning theaters to use ensemble members who have gone on to become AEA members at other theaters at an economic level they can use to build and grow.”

While Chicago is known for its extensive non-Equity theater scene, Lamkey says the challenges faced by AEA in Chicago are the same as in any other city, and primarily monetary. “Theaters would like to have more money and we’d like them to have more money,” she laughs. Foundations and the city and state have been as supportive as they can under the current economic conditions, and AEA works to accommodate any financial situation. Their strong relationships with bargaining partners and theaters alike have thus far weathered the financial difficulties, and Lamkey hopes AEA and Chicago theater will continue to keep one step ahead of the current economic woes.

Lamkey was also integral to the purchase and renovation of Equity’s current home in Chicago. The purchase was an important long-term investment for the company in a purely economic sense—Equity owns the land under their building in New York, and another venture into real estate made sense to the organization. Renovating the building allowed them to configure it specifically to Equity’s needs—including the addition of an audition room and member service center—and to make it more of a home for employees and members alike. Lamkey also recognized the symbolic importance of Equity owning a building in Chicago, a city with a relatively high concentration of work available to AEA members.

One major change in Chicago theater that Lamkey has observed during her twenty-five years with the AEA is an increased level of national recognition. Multiple Tony Awards for Outstanding Regional Theatre have been awarded to theaters under the CAT contract, and a number of theaters have grown from small storefronts to nationally acclaimed companies. Chicago is also remarkable for the number of people who dedicate their lives to the theater scene, she says, and the support they receive from those outside it. Such a supportive audience is something you don’t find in every city in the country, and the growth of our theater scene is emblematic of what the city is capable of. Even small theaters with specialized missions can count on an unprecedented level of support.

Lamkey plans to continue supporting theater in a less intensive way as an enthusiastic patron and volunteer after she leaves AEA. “In some ways it has been almost all-consuming,” she says. “A lot of people say it must be a lot of fun going to so much theater, but when you’re working you’re looking at things a little bit differently. You’re still on the job.” Hopefully, after all her years of work for the Chicago theater community, she’ll just be able to sit back and enjoy the show.