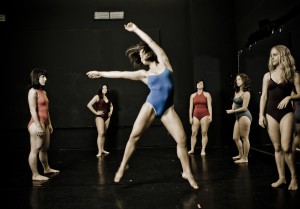 Lizzie Leopold begins our interview by saying, “part of the project was to demystify modern dance.” A moment later, she talked about the challenge of not only presenting, but watching process-based performance—the kind of repetition-based, non-narrative exploration that serves as the foundation of her new piece “une elephante”—and the trust required on the part of the choreographer to pull it off. The two statements might seem in opposition; isn’t slow-paced, story-less dancing the kind that scares away audiences out of fear either of being bored or of having to talk about it afterward?

Well, possibly… Leopold might have been referring to the second piece in her upcoming program—which uses pop party dances like the electric slide as a bridge to contemporary dance—as the demystifying portion of the evening. But there’s something far more interesting about the idea of a choreographer looking to entice new audiences and, in the process, presenting them (and herself) with more challenging material. “I tend to choreograph one step after another and here I gave dancers a task and asked them to sit with it and see how it evolved. I learned to trust the movement more. It doesn’t need as much of a story as I usually give it,” Leopold says. “We have expectations if we’ve seen dance before of newness; this kind of repetition can be challenging to watch. There’s a journey from ‘what’s going on?’ to ‘okay, I get it’ to ‘I can’t believe this is still happening’ and, if you can get past it, to ‘why am I feeling this way and what am I seeing new?’ As a choreographer I’m forced to trust the audience.”

This twofold trust is an indicator of mature work; insightful, disciplined dancers can find whole worlds in a gesture, worlds that are not lost (I can attest as one who has brought lots of friends—many of whom had never been to a dance show—to everything from butoh to ballet) on the attentive viewer. Leopold found the title of “une elephante” on a bathroom stall, interesting to her for two reasons: the incorrect feminine gendering of the noun and its evocation of the phrase “the elephant in the room.” Leopold says the elephant is open to interpretation, but, as a duet, it certainly has something to do with relationships. I suspect that it may, at least to my eyes, have something to say about communication and trust. (Sharon Hoyer)