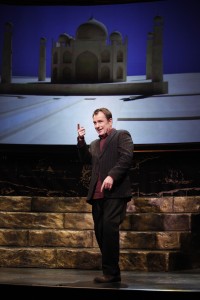 Colin Quinn (best known for “SNL” and “Tough Crowd With Colin Quinn”) has a knack for making cynicism sound almost playful. His latest one-man show finds him systematically traversing the globe in (mostly) chronological order examining the successes and ultimate failures of various cultures and societies, constantly reminding us that despite what we think of the global situation today, things have always been screwed up and will always be screwed up simply because we humans are screwed up. Quinn’s thesis is that even the best societies are undone by continuously “doing the same thing that works, even after it stops working” and like a lawyer employing anecdotal evidence he systematically builds his case, giving humankind a gentle ribbing in the process. Directed by Jerry Seinfeld, this seventy-five-minute recap of history, philosophy and technology feels like an extended (and hilarious) TED talk, with a giant flat screen displaying PowerPoint-like images throughout. Quinn may fudge a few of the historical details, but his analysis is spot-on. (Zach Freeman)