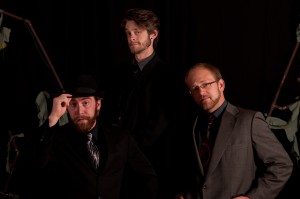 If there’s one thing Nothing Special Productions’ Executive Director Nick Cardiff and Artistic Director Mikey Laird are uncomfortable about, it’s the name of their company. Over the course of an hour, they offer me numerous explanations of how the name—borrowed from a “joke rock band” they played in during high school, and one they are obviously fond of—is appropriate to what they do, and not just a quick-fix title that stuck. It was, from what I understand, but since their first performance the name has come more and more to be representative of the company.

Moving into the city with its vast storefront theater scene was enough to convince Cardiff and Laird that their company is, in fact, nothing special. That doesn’t bother them too much, though. Knowing that theater would continue in Chicago if they or any other company had to close its doors seems to encourage them more than anything else. They’ve always had what Cardiff calls a “sink or swim mentality,” and though they appear to be in a period of swimming—their recent production of “Let X” closed after a successful run—I get the feeling they would be just as enthusiastic under worse conditions. They constantly joke about what they’ve had to learn as NSP developed, the “NSP curse” (the inevitable mishap on each show, which has included standard issues like losing an actor or space last-minute, or more unusually the building they performed in being struck by lightning) and embrace past failures as old friends. To hear them talk, theirs is a history of trial and error, but to have transitioned from doing shows in high schools and churches in Elgin to producing plays in Chicago that have attracted some media attention suggests some of their self-deprecating humor is just modesty.

Nothing Special is, in many positive ways, the perfect name for a company still trying to find its niche. Laird explains that they want to produce everything that supports the “culture of imagination” inherent in theater, from classical to contemporary to new work. Without a special focus in terms of plays presented, NSP is still searching for its identity in the Chicago theater scene, a challenge that both Laird and Cardiff seem eager to tackle. This season represents the first they’ve felt confident to fully plan out, and the first time they’ve had a larger ensemble and staff to work as artists and administrators. Despite the extra help, they are still running into the same difficulties as always—they have selected “My Kinda Town” as the next play in their season, but as of yet have not secured a space for the performance. They hope to be able to perform in February or March, but that will depend entirely on their luck.

Despite current uncertainties, they are still focused upon expanding their presence in the Chicago community, and hope to reach out to audience and industry alike. Next season, they’re considering choosing a theme to tie their productions together, and want to explore the works of Chicago playwrights. They are working to expand into the off- and late-night theater scene, and want to draw in audiences with a staged reading series and a “Fight Night,” a showcase of stage combat choreography.

On a practical level, the name is also appropriate: “In a certain way it describes our productions,” says Laird. “Because we have no money,” Cardiff laughs. “If you can’t make your productions look like they’re worth six times your tiny budget, you just have to love it,” Laird explains.

“Love” is probably the best word to describe their feelings for NSP. “We’ll keep going until it doesn’t work or it isn’t fun anymore,” says Cardiff. They are encouraged by their progress so far, and are incredibly grateful to those who continue to say yes to them. Both Cardiff and Laird have high hopes for the future of NSP, tempered by a very practical outlook. They would love to quit their day jobs, but recognize that probably won’t happen for a while. For the time being, though, they are content to be immersed in the theater world, and hope within a few years to be able to better support the people who work on their shows.