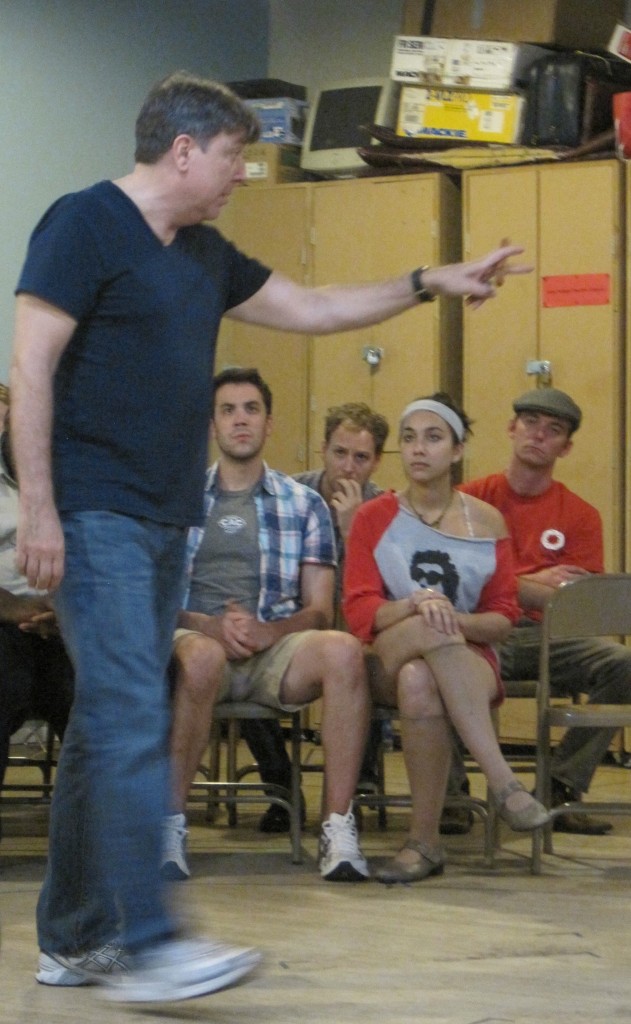 When the American Blues Theater ensemble was gathered in the spring of 2010 to vote on the next season, the idea to produce Clifford Odets’ “Waiting for Lefty” spawned a spirited debate over the relevance of its subject. “We were like, ‘Does anyone even care about unions?'” says producing artistic director Gwendolyn Whiteside.

“And then after we selected ‘Waiting for Lefty,’ all hell started to break loose in Wisconsin,” Whiteside says. “I was fascinated and I couldn’t believe what was going on. And then Indiana erupted, and Ohio, and everything that was going on in world politics. I probably learned more about union politics because of these events in the past year than I had in school.”

School starts early, in mid-August, for the cast of “Lefty.” It’s the opening night of rehearsals and about three dozen or so folks are gathered in a large room that is the Remy Bumppo Rehearsal Space in Lakeview.

American Blues has committed to an extra-large cast for this production—fifteen—and director Kimberly Senior has brought in an additional twelve interns who will be onstage as well. Young to old, black, white, Asian—the cast really seems to put the American in American Blues. Senior, an accomplished local director doing her debut work with American Blues, is adjunct faculty at Columbia College, DePaul and the University of Chicago. Fittingly, her directing style tonight has an academic quality, more concerned with dialogue than decree, and she takes pains to ensure that the cast’s questions and concerns are aired. The set model is presented, costumes, lighting and staging are discussed by their respective creative leaders. Then the first run-through with the script, with some actors fully in character, even in tears, others seemingly still getting acquainted with theirs. Because of the size of the group, there’s not enough room at the reading table for the interns, who sit nearby and participate, several reading from scripts loaded on their smartphones. 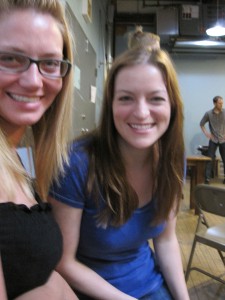 Dramaturg Kelli Marino has assembled a comprehensive overview of The Group Theatre, the labor movement and the American economy in the thirties, when the play was written and set. Videos and slides are shown, photos are shared. She’s also baked cookies—”that’s the real reason they keep me around,” she jokes—and these are period-appropriate confections that used bacon grease rather than butter, which was especially precious during the Great Depression. With the mix of interns, American Blues ensemble members and stalwarts from other Chicago companies like The Hypocrites and TimeLine, the whole affair feels something like a big friendly family reunion.

A couple of years ago, you’d call it the ultimate dysfunctional family. Founded in 1985, American Blues had changed its name to the American Theater Company in the nineties and, as it grew and professionalized, hired artistic directors to give it the day-to-day leadership it needed. But it remained, at its core, an Equity ensemble, second only to Steppenwolf in tenure among such theater companies in Chicago. In 2007, P.J. Paparelli arrived from Alaska to take on the artistic director role. Before long, he and his ensemble were at odds over the latter’s role in guiding the company. Long-established traditions like the ensemble voting to approve the new season plan, or holding one seat on the board of directors, were abolished. “The ensemble theater as we had known it for twenty-three years was put to a halt,” Whiteside says. “The staff was told they could not talk to the ensemble, the ensemble was told they could not talk to the board.” Things got increasingly surreal as the board started sending emails to the ensemble: asking them not to talk to Paparelli for six months, asking several of them (including Whiteside) to take a leave of absence and then, finally, the ultimate boss-from-hell move: Kate Buddeke, an ensemble member for twenty-three years and one of Chicago’s most well-regarded actors, was fired without explanation—via email.

A final round of entreaties to reverse this action were disregarded by the board of directors who, not surprisingly, sided with management over the “workers.” In short order, one of the most dramatic backstage dramas in the history of Chicago theater spilled out into public: every single ensemble member who’d joined prior to Paparelli’s tenure, twenty-three in all going back to its founders (which included writing superstar Rick Cleveland), walked out and announced they were starting over under their original name, American Blues Theater. Paparelli kept the name, the space and the million dollar budget; the now-homeless ensemble settled for dignity and dreams.

Little wonder that a play about disempowered workers voting on a walkout resonated with this company.

Two years later, American Blues is an odd bird in the world of Chicago theater: a startup company with a quarter-century’s experience under its belt and an Equity contract. The charismatic Whiteside has emerged as the leader, and she’s built the budget back up to $250,000, or about a quarter of what they left behind. But more importantly, they’ve produced a small but impressive slate of compelling productions, including “It’s A Wonderful Life: Live at the Biograph!” which is one of the best holiday productions in town, as well as an acclaimed go at “Tobacco Road” in 2010.

American Blues now has a social mission that goes beyond its goal of depicting the lives of “working people,” as well: every one of its productions partners with social and service organizations. “Lefty,” for example, honors a different union at every single performance, from Iron Workers Local 1 to the International Association of Machinist & Aerospace Workers, and includes a Sunday series of topical post-show discussions. Perhaps all this time rooting around in the thirties and that era of progressive ideals lifting a nation out of a depression is getting to Whiteside: her professed dream is to produce shows with low-cost or even free tickets, to allow a broader socioeconomic audience to have access to the theater.

When “Waiting for Lefty” premiered on January 6, 1935, it was something of a tossed-off entertainment on the bill of a fund-raiser. That opening night is now the stuff of legend, with an audience so enraptured by a play that spoke directly into their souls and gave voice to the frustrated aspirations of a working-class nation that when the play ended with the line “Strike! Strike! Strike!” 1,400 people joined the cast in unison, then roared in applause for a solid forty-five minutes. American theater was forever changed: “Lefty” quickly became the most widely produced play in America, and the most controversial, banned in some quarters. And the Group Theatre, which had been struggling to stand up to its early vision, found its legs. 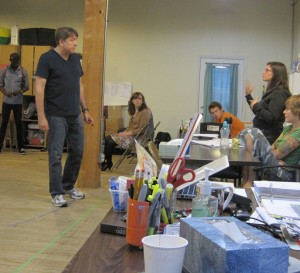 Less than a week before American Blues’ first public preview performance, the “Lefty” cast and crew are gathered at the rehearsal space for one last go at it before moving into Victory Gardens’ upstairs theater, where they’ll produce the show, for a couple of days of tech rehearsal. After less than two weeks, this family gathering is starting to look like a real show. Senior offers her notes on the prior night’s rehearsal, then a stop-and-start run-through lets the actors work out some nuanced elements of their performance. Terry Hamilton, a TimeLine associate artist who recently played Richard Nixon in their hit production of “Frost/Nixon,” commands the stage—actually lines of tape on a wood floor, for now—as the pompous and probably corrupt union boss, Fatt. Halfway through his opening scene, the union rank-and-file stands up to him about the whereabouts of their own leader, Lefty. Senior tries a few different versions of the action before settling on a rule for the crowd: if you’re one of the voices calling out “Where’s Lefty?” you only get to do so three times. No more, no less. It seems to work: Fatt’s lines are no longer drowned out by the crowd but the collective energy of a union meeting still comes through with a punch.

After producing “Waiting For Lefty,” the Group Theatre went on to become America’s most famous theater ensemble, with such icons as Lee Strasberg, Stella Adler, Elia Kazan, Sanford Meisner and, of course, Odets among its members. Not only did it establish their careers, but it redefined the raw material of American theater, with its timely focus on giving voice to the working class. It’s probably no accident that American Blues has established a mission that hews so closely to the trails the Group once blazed. Nor, for that matter, is American Blues unaware of the Group’s founding story. Originally part of the venerable Theatre Guild, the Group Theatre was founded by a number of dissatisfied theatrical visionaries who, as co-founder Harold Clurman challenged them, came to see the theater not as a place to work but as a place for a community doing work “that must create from the chaos which is the common experience of its members, an expression that will have, like that of the individual artist, an identity and significance with which people, sharing the common experience, may sense their kinship.”

Those who followed Clurman and left The Guild for The Group went on to make theater history, trading its gilded affectations for the concerns of the common man. Today, with the middle class under siege as the rich consolidate wealth in a manner so ostentatious that even yesterday’s Morgans and Rockefellers might have taken offense, while the economy churns working-class Americans out of jobs and homes and dreams, the time might be ripe once again for a revolutionary theater of the people. Especially if American Blues Theater and the storm-birds of the working class have their way.