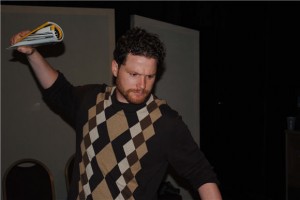 Sometimes in the immediate wake of a tragedy it’s difficult to make sense of all the noise. Such is the case for the characters in Sean Farrell’s play set in the year following 9/11, few of whom were directly affected by the event but nevertheless felt their lives thrown into chaos by it. But the connection between the individual issues and the broader trauma remains obscure for the audience, which is a hurdle for this remount of the hit 2002 play.

Set largely during couples therapy group sessions between two couples and one mysterious man who claims he can’t wake up from a dream, the play scratches at ideas of loss, betrayal, religion and tragedy.But none of those scratches quite goes deep enough, although the many moments of alternately acrid and absurd humor illustrate the confused state of the characters. Director Bill Ryan and his cast and crew still manage to get a bittersweetly moving production out of an unfocused script. (Neal Ryan Shaw)