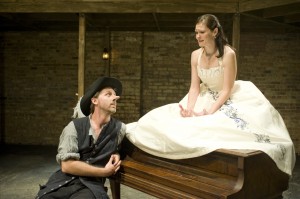 Most anyone is likely to be familiar with the story of Cyrano de Bergerac, even if they’ve never seen Edmond Rostand’s 1897 play. The Steve Martin adaptation “Roxanne” was a popular film, and the play’s balcony scene is rivaled only by the one from “Romeo and Juliet.” Ubiquity aside, however, Matt Hawkins’ new version strips the story down to its iconic bare essentials, making for a swashbuckling, irreverent evening of heroism and romance.

The poet and soldier Cyrano has oodles of panache but falters in love due to his large nose. When the object of his affection, Roxane, tells him that she loves the attractive Christian, Cyrano reluctantly agrees to befriend and protect him. And when Christian confesses his love for Roxane but doesn’t know how to woo, Cyrano and he conspire to give her the perfect man: the sum of Cyrano’s wit and Christian’s looks.

Naturally the complications increase from there, but Hawkins’ writing, which forsakes many of the original play’s subplots, always remains clear yet suspenseful. Only the songs, which push the show’s modern sensibilities a bit too far, feel extraneous. Shawn Pfautsch’s performance as Cyrano drives the show with nary a misstep, and Stacy Stoltz shines in her limited role as the damsel Roxane. (Neal Ryan Shaw)