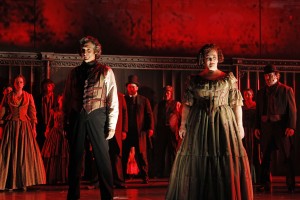 Stephen Sondheim has garnered considerable attention recently about how miffed he was concerning changes being made in an upcoming Broadway adaptation of “Porgy and Bess.” Many have applauded his purist stance. Others are genuinely puzzled by it: not so much because of his defense of Gershwin’s original work as the fact that Sondheim himself allowed equally—if not more—radically destructive changes to the film version of the work usually considered his masterpiece, “Sweeney Todd.”

We have seen “Sweeney” presented as an opera, a musical, as a chamber music piece, an oratorio, as a comedy and, with Tim Burton, as a grisly and humorless slasher film occasionally interrupted by truncated and poorly done singing. 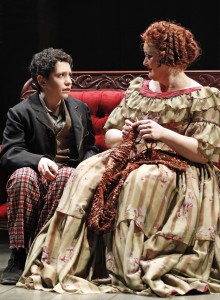 With so many performance options, director Rachel Rockwell wanted to pick and choose aspects of various approaches in her current Drury Lane Theatre production. In terms of visual and sonic style, Rockwell has come to terms with the fact that Burton’s film version has changed audience perceptions of what “Sweeney Todd” is now: the crashing pipe organ chords that open the work are not of the subtle, haunting variety of the original, but rather, seek to evoke elephantine epic Gothic horror a la Andrew Lloyd Webber’s “Phantom of the Opera.” This production is so murky and full of cobweb-like trappings that it often has the feel of a Halloween haunted house rather than a musical theater piece. The violence, too, is graphic, gripping and anxiety-producing.

And yet, unlike Burton’s film with its detached, cartoon-like emotionless characters, Rockwell never forgets that despite the explicit horror trappings, that when one attends the tale of Sweeney Todd, it is important to feel something for the character despite his gruesome actions. In this, Gregg Edelman gives us a Sweeney who is a broken man, to be sure, but who reminds us that it is his sense of powerlessness in a world of corrupt authority that casts him and his wife, daughter and career aside.

One of the most brilliant aspects of this production is that it shows Sweeney from two sets of eyes firmly fixed on him: Liz McCartney’s Mrs. Lovett, who falls in love with him and comes to her dastardly idea of serving up Sweeney’s victims in her pie crusts, and Jonah Rawitz’s Toby, who falls for Mrs. Lovett and comes to see Sweeney as a threat to her. Mrs. Lovett has always been the show’s central character but here, we experience Sweeney come back to life with a new purpose of revenge via her encouragement, but with a scribe taking careful notes in young Toby. And borrowing an effective idea from Burton’s film, here Toby IS a boy, not an older teenager or young man as he is usually portrayed. This makes his key song “Not While I’m Around” a very different and more tender experience and gives the climax of the show a real wallop since we have come to care about these lost characters.

And yet, the central element that for many of us is what has always made “Sweeney Todd” the special work that it is and yet was completely removed from the film version, i.e., its humor, is well preserved here. The work is a comedy for sure, albeit a dark comedy, and the manner in which this production is able to preserve that aspect while maintaining horror and heart puts it a cut above the rest. (Dennis Polkow)