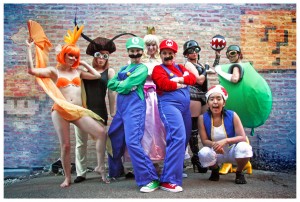 The success of Geek Girl Burlesque at Gorilla Tango Theatre over the past year is impressive by any stretch of the imagination. In October of 2010, “Boobs and Goombas: A Super Mario Burlesque” launched as something of a curiosity—an improbable parodic tale in which Mario and Luigi become so sexually frustrated that everywhere they look they see “beautiful ladies.” Geeky jokes about Nintendo characters intertwined with seductive costuming and burlesque strip teases caught the media’s—and the public’s—attention. Most, even the nerdiest, seemed to take the show as something short-lived, something that geeky gamers would rave about and then move on from. But that’s not what happened.

Nerds, along with everyone else who made the trip to Gorilla Tango, loved the way Geek Girl Burlesque comically paired scantily clad women with nerdy fanboy (and girl) obsessions, keeping most of the jokes broad enough to appeal to a mass audience, while occasionally diving into the deep end for the diehards. In hindsight, it’s a golden combination. And it wasn’t created arbitrarily.

Husband and wife team Dan Abbate and Kelly Williams had been running Gorilla Tango in Bucktown for about four years when they started to pick up on a pattern regarding which shows were most marketable: They found that parodies tended to do very well, as did burlesque. And they started wondering what would happen if they brought the two things together. Williams reached out to a friend she knew through improv, the nerdy/sexy MsPixy (who prefers that her real name not be used in articles or interviews), and after an initial meeting of the minds, Geek Girl Burlesque was born. 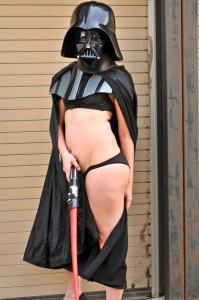 “Goombas,” their initial show, launched them into the spotlight a lot faster than they expected. Originally scheduled to run twice a week for a single month, the show became a monster hit, selling out the first two shows a week in advance and quickly gaining interest from various media outlets and strong word-of-mouth. After being repeatedly extended for almost a year, “Goombas” now boasts a rotating cast of sixteen actresses and its own geeky cult following. “When people start making fan art, you know you’ve caught on,” says MsPixy.

That could be the whole story—a surprise hit is born and blows away expectations—but the trio didn’t stop there. In the past year, including “Goombas,” Gorilla Tango has launched four shows under the Geek Girl Burlesque banner (two written/directed/choreographed by MsPixy herself). But what’s extraordinary is that three of those shows (“Goombas,” “A Nude Hope: A Star Wars Burlesque” and “Fellowship of the Boobs: An LOTR, WoW, D&D, RPG Burlesque”) are still running, and a fourth, the upcoming “Boobs of Khan: A Star Trek Burlesque” is scheduled to open this week. (“Gleeks and Freaks: A Glee Burlesque Musical” was extended twice before closing).

To Abbate, this is a surprising, but very welcome, development, even if it has caused Gorilla Tango to rethink its business model. Where previously Gorilla Tango sought to rent their space out to other production companies well in advance, the staying power of the Geek Girl Burlesque shows has forced them to make a decision: “When people start booking space months in advance, do we book those or hold those for Geek Girl Burlesque? We made the decision to reserve those spots for these cool shows.”

Abbate, Williams and MsPixy only have so much time, and in order to keep the shows coming, ideas are “commissioned” out to different groups. The upcoming “Boobs of Khan” was pitched to the sketch group The Nerdologues after Katie Johnston, a Gorilla Tango producer, saw them perform at Chicago Sketchfest 2011. As the troupe was working on the script, Gorilla Tango took a liking to the playful attitude of Caitlin Costello, the troupe’s sole female member, and asked her to direct the show. Asked what will surprise “Star Trek” geeks, Costello gushes, “We have managed to bring The Original Series ‘back to the ‘future’ to visit The Next Generation.  Data meets Kirk!” It’s pretty clear Gorilla Tango knows how to spot a geeky female.

With the brand experiencing so much success, it’s only a matter of time before these shows outgrow their current space. Geek Girl Burlesque is looking to do a bigger, more spectacular—“with more glitter” chimes in MsPixy—version of “Goombas” at The Viaduct Theater here in Chicago (which boasts a maximum capacity of 250, versus Gorilla Tango’s eighty-eight) as well as setting up a residency at The Brick Theater in Brooklyn.