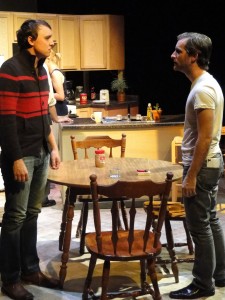 Kurt (Carlos Rogelio Diaz) returns from Afghanistan, haunted (literally) by a deceased marine buddy (Keith Falconer), who demands that important correspondence be delivered to his husband (Adam Stephenson). Kurt struggles with his guilt and delusions while wife Claire (Robyn Coffin) struggles with their marriage.

It’s a great premise, but playwrights Heather Bodie and Emily Gann’s script strains for credibility. In the social media era, it’s hard to believe a man would not know his lover’s whereabouts, regardless of his lack of mention on the next-of-kin list–Marines use Facebook, too. The authors have great ears for dialogue, but fail to use it to explore Kurt’s hang-ups and hesitation.

Coffin captures her character’s struggle, but the other characters’ conflicts are lost in mushy, low-volume line readings in the barn that is the Viaduct’s large space. A story with potential got lost in the execution. (Lisa Buscani)