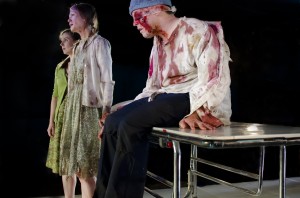 It feels almost beside the point to note that, in turning Sophocles’ seven surviving plays into a four-hour theatrical event (with dinner), some elements are going to get edited out or lost. Each of the plays has been compressed to half an hour or less, so that the tension inherent in, say, the dramatic irony of Oedipus’ self-delusion, never builds over enough time for it to be unbearable for the audience, as with the Hypocrites’ 2009 adaptation of the play. And the most common critique volleyed at writer-director Sean Graney—that he butchers literature to make entertaining theater—could certainly be applied here, for Graney’s trademark high and low language is out in full force, modernizing the stories and adding in comedy at every turn.

But none of this seems to matter in the least during the show. I’m a self-admitted fan of the theater company, but this is by far the most ambitious Hypocrites play I’ve seen, and one of a few that have seemed utterly necessary in retrospect. What Graney and the unbelievably talented cast have done here far outweighs liberties with the script (and maybe this won’t sound like a massive success, but it’s rare in my experience): They’ve made every single one of the often alien, hyperbolic characters of Sophocles utterly human, where these plays so often feel disconnected from our experience of character and emotion. Because it’s The Hypocrites, “Seven Sicknesses” is funny, and it’s hip, and it’s technically gorgeous and flashy; but the adaptation has added profound substance. It’s not that the show just psychologizes the characters; it makes them relatable, epic in the Brechtian sense—and thereby epic in every sense of the word.

The seven acts in three parts take place in a modern hospital, where the sickness of the house of Atreus and the ills of war are a perennial theme, and two deadpan nurses provide much-needed comic relief as a half-shellshocked, half-blasé chorus. The play is structured so that while the ensemble permutates between ever-shifting characters, strengthening the sense of cyclical fate, certain characters, like King Creon, appear over and over, stabilizing the story so that it begins to resemble a kind of bloodbath-filled “Twin Peaks.” Seeing Antigone, for example, develop from a traumatized girl in the first act to a woman burying her brother in the final scene gives her story its true sense of sustained, lifelong pain missing in individual productions.

There’s plenty of stomach-turning violence (first-row audiences have the chance of getting splattered in fake blood), dark humor and musical interludes (all songs come from Bruce Springsteen’s album “The River,” which somehow works perfectly here) to keep the energy well-paced as the bodycount rises. The actors are all-in, with uncompromising performances that constantly turn on a dime. But beyond the blood and gore, one-liners about suicide, and great fight scenes, there’s tremendous victory in this production. (Monica Westin)