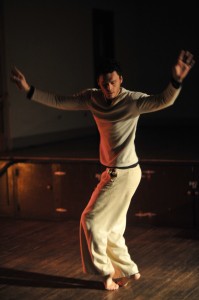 Most every artist does battle with the beasts of ego: anxiety, embarrassment, fear and, in the case of performers, awkwardness. Instead of fleeing or subduing them, Jonathan Meyer has chosen to take out the scalpel and better know his enemy. His three-part, yearlong Home series emerged as a courageous unpacking of the things that make Meyer uncomfortable as an artist, then abstracted to allow audiences interpretive space. In this final installment, Meyer performs solo, at times nude, in a dusty, sandy, 15,000-square-foot construction site in Pilsen, moving to a score by his collaborator Christopher Preissing. A quartet of female vocalists, a multi-track recording composed from field recordings and Meyer’s voice, and a murmuring, cheering, whispering Greek chorus create an aural atmosphere intended to heighten the experience of witnessing the performer alone—what Preissing and Meyer call a sound-movement opera. The audience is taken on a journey through the space, given license to stand and observe from the vantage point of their choice. I spoke with Meyer on the phone about this final installment, entitled “Whence.”

How does the subject matter of personal awkwardness and embarrassment work in an intimate, collaborative context?
I think that when I first approached Chris he had a certain level of discomfort with the text. He made a choice to de-personalize the stuff I was dealing with. We also have a long and crazy working relationship. I think the difference in media allowed space for how to work with that. We’d talk about ideas abstractly and work separately then come together and see how things were working.

Why did you decide to let the audience choose where to stand or sit?
I’m interested in challenging the audience, but I’m also interested in giving them a lot of room and freedom. For me as an audience member I appreciate that sort of thing and it helps me feel more engaged as a witness. I felt like, particularly in this space, it was an important element to offer.

And likewise, they have an effect on you and your performance. Does it present any complications when you’re developing material that has to do with voyeurism and awkwardness to have to imagine an audience and how they’ll influence you?
Yeah, it’s been interesting. The first two versions I found I was really struggling with creating the work and disliking it pretty intensely. But as soon as I got in front of the audience that shifted for me. I have some degree of the same trepidation with this work and I’m trusting that a similar thing will happen. It’s very much based on how I relate to the audience and how they relate to me. I’m trusting that will work again.

What has the exploration of unsettling yourself brought up for you personally?
It’s kind of elusive for me to put into language. I’ve explored nuance in audience/artist relationships quite a bit. One thing that has come up is the question of vulnerability and what that means. I think we have a sense of the artist’s vulnerability on stage—and I’ve done a lot to exacerbate that—but I also think there’s something to be said about an audience member’s vulnerability. That’s something that any audience member can embrace or hold at bay. As I’ve tackled discomfort for myself, I’ve become more aware of that for the audience as well. Can that offer a payoff or reward in a way that wouldn’t have been possible if the awkwardness hadn’t been present?

That was my next question: the reward.
There’s a lot of humor and enjoyable things available in the work. For myself, it’s been a real struggle. When I put myself in a situation to confront certain things, it forces me to find more resources that I wouldn’t have found if I hadn’t put myself in that circumstance. I’ve relied on improvisation a lot more heavily—it was something I used to avoid on stage. It’s still uncomfortable to me, but I’ve gotten a lot better at it. There’s a freeze you experience as you’re improvising and you feel things not going right. What do you do with that in that moment? The more I do this the more options I feel open up for me. And some of those options are a lot more interesting than ones I might have chosen otherwise.