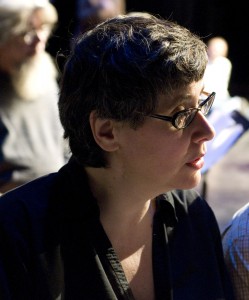 Under Peter Taub’s direction, the Museum of Contemporary Art comes full circle this year with its development residency for Curious Theatre Branch: The MCA’s performance program began decades ago with informal performances by Chicago avant-garde mainstays like Goat Island and Curious. After expanding to include, and occasionally focus most on, global and international performers, the MCA Stage has returned to its roots the last couple of years, with high-profile residencies and performances for Every House Has a Door (a Goat Island reincarnation), Lucky Plush and 500 Clown. But rather than a short creative residency (usually only a few days or sometimes weeks), Curious artist Jenny Magnus has been in residency at the MCA for a full year as she developed “Still in Play: A Performance of Getting Ready.” We spoke with Magnus the week before her show opened about the intrigue of rehearsal and residencies writ large.

“It was pretty intense,” Magnus says of the year-long development residency. First of all, the opportunity was “like the hand of God reaching down and putting a crown on my head… it’s tremendous to have a mid-career gold star like this.” And Magnus, the definition of “self-made,” occasionally found it disorienting to be “under the aegis of someone or something. My gang and I pride ourselves on being iconoclastic and doing things our way.” Coming into contact with even minor rules and regulations “that I didn’t generate” created mixed moments of “great elation and thrill and tremendous affirmation, and moments of dismay and moments of having to translate what we’re doing into the language of the MCA. Curious, dinky and half-assed as we may be, we have our own language.”

The experience, however, turned out to be “fantastically positive,” thanks in part to Magnus’ “office hours” experiment. “I wanted to do something in the museum that was a physical representation of the idea of residing… so I made an office-hours booth, much like Lucy’s ‘The Doctor Is In’ booth. It was an amazing way to talk to everyone in the museum, having authentic conversations.” This “embodied dramaturgy” in the MCA space allowed the company to figure out how they fit in at the museum with which they have a fifteen-year relationship—from “dating” to “going steady.” 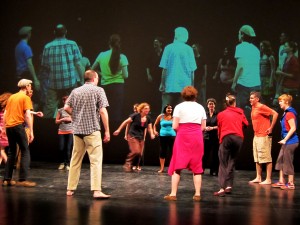 This type of residency—long-term, collaborative and deep—rather than a few days for rehearsal in the performance space, is the kind of model many hope will expand at the MCA in the coming years, when even our most critically acclaimed local theater companies are more and more in need of institutional backing.

In this case, the intensity of the development residency experience found its way into the thematics of the performance: “Still in Play: A Performance of Getting Ready” is about the rehearsal process, with its own highs and lows. This isn’t the first piece the MCA has staged about rehearsal (notably Teatro de Ciertos Habitantes’ “El Gallo” last spring)—why do audiences continue to be intrigued by the rehearsal process? Magnus points out that “what’s most fascinating about rehearsal is the possibility of shaping your experience and then being able to do it again, to make it more satisfying. This doesn’t happen in life.” She laughs again. “As another example, I think a great video game would simply be a marriage, with two people trying to be married, and keep trying situations over and over again… rehearsing a situation that has rehearsal in it.”

But perhaps even more immediately, Magnus notes: “I found in the last few years of my teaching practice that, while I used to assume that people knew what actually happened in the rehearsal process, it began to dawn on me that wasn’t true at all. What rehearsal accomplishes, how it can abuse relationships in its most extreme case, all this is hidden from everyone except the few participating. Usually all you see is the finished so-called thing, but there’s tremendous real humor and pain in trying to make something together.” The deep, long-term collaboration between the MCA and Curious Theatre Branch might provide the most exemplary model of the kind of making-together that we’ve seen recently in Chicago theater.

“Still in Play: A Performance of Getting Ready” runs September 15-17 at the MCA.