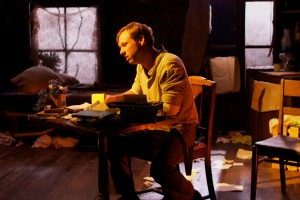 When poet Donal Davoren holes up in a tenement in Dublin, word somehow gets around that he’s secretly on the run as a volunteer for the Irish Republican Army. Thought it’s untrue, he makes no effort to correct Minnie Powell, an attractive neighbor who fawns on Donal for his apparent secret, and later he writes the lines, “What danger can there be, bein’ the shadow of a gunman?” More ironic poetry was never written.

Seanachai’s production of this Sean O’Casey play speeds along through a hilarious first act and a more serious, manic second act that involves the rumor of a package of bombs that may or may not have shown up in the tenement. The play’s politics are anything but subtle, and indeed the harrowing scenes of violence and oppression resonate powerfully some ninety years later. Director John Mossman manages both the tonal shifts and the pace of the play with ease, and elicits strong performances from the large cast led by a terrific Shane Kenyon as Donal. (Neal Ryan Shaw)