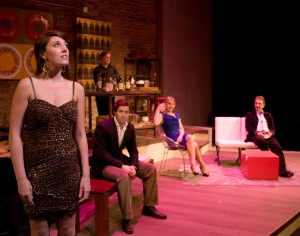 Unless you happened to catch one of the first five performances of Porchlight Music Theatre’s production of the Stephen Sondheim revue “Putting It Together,” you missed the principal reason for seeing this show, i.e., Austin Cook’s piano playing and music direction. It seems that Cook became cast as Jerry Lee Lewis in the national touring production of “Million Dollar Quartet” and played only the first week, which was itself two shows short, before departing. The rave reviews being touted about are based on Cook’s initial presence and the only indication theater goers have been given of this monumental change is a program insert with the biography of another pianist.

How is the show faring without Cook? Sunday afternoon’s performance which, I was forewarned, nearly had a cast casualty as well but did go on with all five principals, was a valiant attempt to make the best of an unfortunate circumstance. The replacement pianist had his hands full, literally, trying to keep up, and had his head understandably in the music rather than conducting the band and the voices. This meant that the rhythm of the piano, bass and drum trio was often tentative, at best, making for singing that was often the theatrical equivalent of tightrope walking.

The theater’s odd solution was to boost up the acoustic bass, which was distractingly and unnecessarily amplified in a shoebox theater, giving the proceedings a loud thump at every turn. Even more bewildering was that each singer was also miked and amplified through a tinny house PA system that served to drown out from above whatever natural projection might have been there amongst the performers, despite their being a stone’s throw from the audience. A guy in the corner sat there changing the volume virtually every song, sometimes every phrase, sometimes to the point of distortion or feedback before going back and starting from scratch. This listener found this to be a game-breaking aesthetic, particularly since Porchlight had always presented its shows without amplification, a hallmark of its previously charming intimacy.

As for the cast itself, these are world-weary songs done by a troupe so youthful and in such an informal manner that little of the irony and life-living insights that need to be communicated came across, which might have been the one saving grace since the musical element was so off base. (Dennis Polkow)