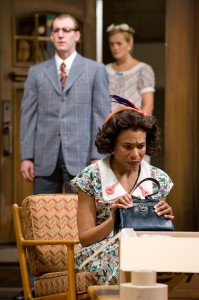 A brilliant tribute to “A Raisin in the Sun,” Bruce Norris’ Pulitzer-Prize-winning play consists of two acts that bookend Hansberry’s drama about a struggling black family’s poignant attempt to make a better life for themselves in the white enclave of 406 Clybourne Street. Norris sets “Clybourne Park” in this very house, where the first act portrays the previous owners’ tragic reasons for moving—and getting back at the neighborhood by selling the house to blacks. The second half jumps fifty years forward to the present day, where the neighborhood has become all-black, financially debilitated and ripe for gentrification in the form of a seemingly well-meaning white couple who would demolish the house, bringing with them new politically correct phrases that only partially cover the same old tensions and motivations. “You can’t live in a principle,” is the chorus of the play. When the second act (intentionally) devolves into clichés and racist jokes that feel stilted and boring, Norris drives home the point that talking freely about race is just as much of a landmine now as it was a generation ago. And while Norris drafted “Clybourne Park” before the subprime mortgage crisis, the current housing crisis and new revelations about the deeply corrupt financial world leading to it lend yet another trajectory to the story. “The history of America is the history of property,” one character muses. It’s almost beside the point to say that the show is impeccably produced, with Amy Morton gutsily directing an all-star cast at their best, in particular Karen Aldridge as the embodiment of repressed rage vying with idealism. (Monica Westin)