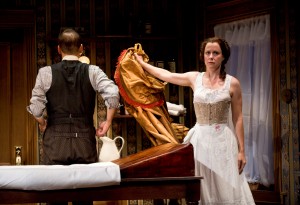 Sarah Ruhl’s take on an 1880s costume drama both is and is not a historical exploration of electric vibrators as cure-alls for women’s hysteria during the dawning of the modern age. It’s also a meditation on the elusive nature of love and desire, and seemingly a call to eros writ large. But it’s also a staggeringly well-made play, with some of the most intensive dramatic irony I’ve seen in recent memory. This irony is bound up in the historically accurate conceit of the play, which is that it was not until the 1920s that vibrators were ever associated with sexuality, even as physicians used them on women to cure them of various kinds of, ah, congestion. One such physician, his verging-on-sexually-awakened wife, and various Victorian patients in the play exhibit a kind of naivete that’s almost too much to be believed, but it also creates a running gag that somehow never stops being funny—as the doctor gives his patients on-stage orgasms (under a tasteful sheet, with a vibrator that looks like a power drill), everyone murmurs in awe of the machine about the rosy glows of health it bestows. There’s a larger story here, about modernity and alienation, the seeds of neoliberalism (the doctor’s wife outsources her baby to a wet nurse), a particular kind of woman’s loneliness, and a proto-feminism motif that emerges in the honesty with which female characters talk to each other when men leave the room. But the play, thankfully, delivers its messages with a light touch; even for Ruhl, “In The Next Room” is fairly blithe in spite of the deeper subjects it hits on. Sandy Shinner’s direction in Victory Garden’s production is compelling but delicate, letting ever-shifting moods and moments register; and the cast brings a similar complexity to what could have easily bordered on farce. (Monica Westin)