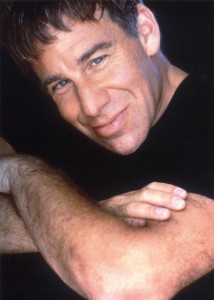 For a guy who has been working as a high-profile Broadway composer and lyricist for “over forty years now—oh my God, can you believe it?” Stephen Schwartz is remarkably youthful both in appearance and attitude.

Sitting in the basement of Northlight Theatre in Skokie on an early Saturday morning clutching green tea prior to the final day of rehearsals before the first preview of his new work “Snapshots,” Schwartz exudes an enthusiasm and energy that is refreshing and contagious.

“It’s a new work, certainly, in that we keep tinkering and changing things,” he says, “but this isn’t the first version of the show that has been presented. We haven’t had an official ‘world premiere’ yet because I always feel that is the finished work at that point. ‘World premiere’ is a concept that is more important to theaters and venues than to writers.”

And if you are going to do a new work, where better than Chicago, which has been central to Schwartz’s career from its earliest days? “My first time here was the sit-down production of ‘Godspell’ at the Shubert Theatre,” Schwartz recalls, but he came back in the mid-1970s to meet Studs Terkel and pitch the idea of doing a musical based on his book “Working,” which then originated at the Goodman Theatre in 1978.

“The talent pool here is very strong. Actors want to be here and aren’t looking to escape to New York or Los Angeles but like it here and are very interested in projects. There are very interesting directors, very good theaters who do all kinds of different things. The attitude of the critical community here has always been constructive and supportive, not just trying to put a rubber stamp on something that you either love it, hate it. And audiences here really want to support new work, participate in its development, really intelligent, supportive and enthusiastic about the theater and wanting to discover new things, so I’ve always loved working here.”

When “Wicked” first came to Chicago in 2005, Schwartz knew that there was plenty of local talent for Chicago to have its own production, but is still “blown away” by the audience response to the show. “It was originally going to run here for a couple of months and then we would move on,” says Schwartz, “but we ended up putting together an entirely new production!” That multi-year production broke all local box office records and created a new template and popularity for Broadway In Chicago.

“Working” not only began life here, but its most recent incarnation made its way back downtown earlier this year. “I always wanted to have a really good production of ‘Working’ back in Chicago. My disappointment was that I would have liked to have had it here while Studs was still with us. We just missed him by a couple of years.”

“Snapshots,” which is in previews and opens Saturday at Northlight Theatre, is a revue of Schwartz’s work that spans “Godspell” to “Wicked,” although it does not include the material that he wrote for animated films such as Disney’s “Hunchback of Notre Dame,” “Pocahontas” or DreamWorks’ “Prince of Egypt.” “This is all stage stuff,” says Schwartz, “but there is a song from Disney’s ‘Enchanted,’ which was a live-action film. 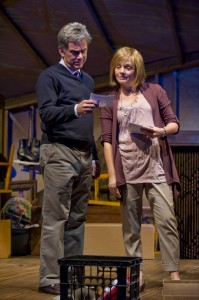 “We call it a musical scrapbook because it is not really a revue and not really a book musical, but somewhere in between. There are characters, there is dialogue, there is a story, a journey they go on, a beginning, middle and end having to do with rites of passage, but all of the songs are taken from other shows. But during development, it became clear that the lyrics to the songs in many cases had to be adjusted or rewritten in order to tell the story more completely.

“So I wound up rewriting a lot of lyrics so that people who may know my work may have to adjust a bit, hearing ‘Popular’ with different words.” And since Schwartz also wrote the lyrics to his songs and, in fact, in some cases to the music of other composers, those are adjustments he could make in a way that would not be true of the standard jukebox musical or a show made up of ready-made songs. “It’s very far from a ‘and then he wrote’ revue; maybe one day there will be one of those and the usual suspects will appear, but each song here is used and often restructured for a particular purpose.”

Although the “Snapshots” motif really concerns moments of characters in the show captured in photographs, it also in some sense has afforded Schwartz a clearer look at snapshots of his own creative process. “When you are writing,” he says, “you can’t be objective. You have to submerge yourself in that process and not be the editor and let stuff come out and allow it to take you away. But then when it comes to how to use something that you’ve written, I think one tries to be objective and look at it, hear it and see how well it’s working in context and what to do to tinker with it or improve it.”

Curiously, as far back as he can remember, Schwartz has had “a gift for melody and for tunes that other people would find memorable or desirable to listen to” and “an ability to put music and words together in a way that supported the words and seem to make sense and tell a story. I think those are gifts, instincts that one is born with and it’s hard to learn that kind of process. But I have become more skillful from a craft point of view over time, particularly with lyrics. I feel like I have really learned a lot from sheer experience, making mistakes, figuring out techniques, etc.”

Another influence on Schwartz’s development unique to his generation was what he calls “the era of the pop singer-songwriter.” “At the end of high school, the beginning of college, came the Beatles, Paul Simon, James Taylor, Laura Nyro, Joni Mitchell, Cat Stevens, Elton John, all of these people whose work was very eye-opening and ear-opening to me. And so, when I actually started to write shows, that’s why that kind of writing style came into the shows that I did. At that time, that was unusual and to a certain extent, controversial. Many of the theater intelligentsia at that time felt that you could not actually tell theater stories using pop music and that you had to use more standard theater music models. Today, even in the theater, it has evolved over the forty years I have been doing this to where everything is pop and there is always a drum set, an electric bass; but these things were rare when I began.”

Although songwriters often have a template for composing, Schwartz admits that for him, there is no formula. “The only thing I have learned over time is that it really helps me to know the title of the song as early as I can in writing it because it helps me figure out the shape of the song. Sometimes it takes a little while. Other than that, it really is the path of least resistance: I might start with a lyric, I might start with a tune, a rhythmic riff or harmonic progression, as was the case with ‘Wicked.’

“It is not necessarily melodic first off. I am a keyboard player and I write at the piano. I don’t actually like to write something away from the piano, although every now and then I will write something that is guitar-based or based on a drum loop. When I sit down at the piano, my fingers will do things that I wasn’t expecting and I am listening and making choices. The feel comes out through my fingers onto the keyboard.

“When I worked with Leonard Bernstein [writing lyrics for his “Mass”], he used to encourage me to try and write away from the piano, but I found it difficult to do because there is something about the emotion that comes out viscerally for me that comes out through my body and I’m discovering it as I go. And you’re not limited by your technique: Frequently, I write things that I can’t play very well, even though I am a good keyboard player.”

There is also the phenomenon of songs emerging that are not originally related to a show, a classic case being “Fathers and Sons” from “Working,” which is part of “Snapshots.” “My son got married last week, and at the wedding I sang a medley of ‘Fathers and Sons’ and ‘Hardest Part of Love.’ Both songs were written with him in mind, particularly that first verse about, ‘I remember when you were three and a half, you know how tough you were to get to bed,’ and that’s all completely directed at Scott. And some of it is about my own dad, particularly the stuff about baseball games and sleeping in the car.

“In fact, when we were first doing ‘Working,’ I had to be persuaded to put it into the show because I felt it was too personal of a song for a show that was derived from interviews of other people’s words. It is why I didn’t originally give it to a character, which was not a good choice. Tinkering with the show, of course the song has greater emotional impact by caring about someone who is singing it. Context is so important.”