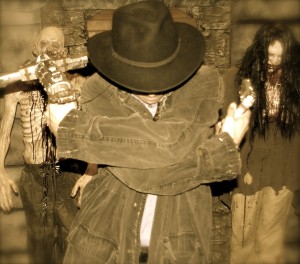 In a nod to the technological gimmickry of Hollywood’s B-rated past, at one point in “Scott Janus” a crew member walks before the audience holding a stick with pine-scent air fresheners and spritzing them with water to enhance the smell. The idea was to give the coming scene the sense of a wooded area, but the trick, a live theater version of Smell-o-Vision, didn’t work. However, that was likely the point.

Comic book-loving Eddie Edderson suspects that his neighbor, Mr. Nosferatsenberger, might be a vampire who has occasioned a series of cryptic deaths. Calling on the services of the titular hero, Eddie and his friends find themselves embroiled in a mystery of Scooby Doo-sized proportions. Writer Paul Czarnowski and director Sean Harklerode pack in as many references to the B horror films of yore, a clear object of their obsessions, as they can think of. While there seemed to be as many unintentional mishaps as intentional, the late-night crowd should get a kick out of the show’s sense of campy fun. (Neal Ryan Shaw)