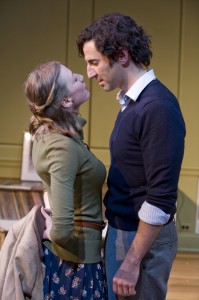 Leave it to Tom Stoppard to make me rethink my position on plays about the scandals and travails of affluent white people and their lovers. But then few writers are as intellectually challenging, insightful or careful with their words  as he. (As Stoppard’s fictional counterpart Henry says in the play, “If you get the right ones in the right order, you can nudge the world a little or make a poem which children will speak for you when you’re dead.”)

So even if to a degree the play is fueled by the question of did she or didn’t she “get off” with someone else behind his back, it’s the layers upon layers of reality, fiction and illusion, building as the play goes on, that make it turn in a meaningful way. It’s an honest and funny examination of fidelity, not just between people, but between art and life as well. Michael Halberstam’s production makes sure never to over-emphasize the satirical edge of the play, letting the play be relationships as much as be about relationships. (Neal Ryan Shaw)