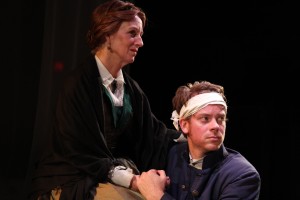 It’s telling that this 210-minute Gordon Edelstein adaptation of Eugene O’Neill’s “Mourning Becomes Electra” (itself an update of a Greek myth) is marketed as “shortened” on Remy Bumppo’s website—a three-and-a-half-hour show can scare audiences off (at least it’s not five-and-a-half!). But split into three acts (each around an hour long) this gutsy debut by incoming artistic director Timothy Douglas is fast-paced and compelling throughout.

There’s not much by way of a set—a few chairs, some columns and a giant portrait—but this somewhat-blank slate serves as an ideal setting for the thick emotional backdrop the powerhouse cast manages to construct with the potent dialogue. Set at the end of the Civil War, the story follows the infighting of the influential Mannon family through affairs, one-upmanship, murder and suicide. Annabel Armour and Kelsey Brennan are cunning and manipulative as embattled mother and daughter, David Darlow embodies a weakened but stalwart patriarch and Scott Stangland’s despondency and malleable strength is haunting. Sound design by Victoria Delorio nicely increases the sense of impending doom. (Zach Freeman)