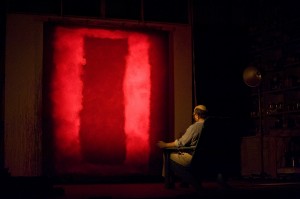 John Logan’s play is intentionally tricky: it both valorizes and occasionally gently undermines our hyperbolic image of the artist as a visionary, rebel, philosopher and spiritual guide all in one. For no period in recent art history has this stereotype been more reified than in abstract-expressionism, where the personalities of artists like Pollock, de Kooning and Rothko were fetishized through creation myths fueled by their hyper-subjective creative work. And Logan plays right into the urge to personify the emotional intensity of the ab-ex canvas by presenting us with a larger-than-life Mark Rothko, nee Marcus Rothkowitz, who faces in the play the difficult decision of whether to sell out—literally—a set of exquisite color-field paintings commissioned by a fancy restaurant.

Meanwhile, the other action in the play drives from Rothko’s fictional assistant, who represents the new postmodern wave of pop art and the new art-world order of the sixties, with its Brillo pads and soup cans and artistic impersonality. Logan has Rothko raging, mostly pompously and pretentiously, but utterly sincerely, against the dying of his relevance and what he sees as the end of seriousness in the art world—citing Nietzsche’s “The Birth of Tragedy” and comparing his own work to Caravaggio and Turner. The colors black and red, which dominate the canvases—monumental replications of Rothko paintings indeed designed for the Four Seasons restaurant—in the crammed atelier set of Rothko’s studio are used by the artist in conversation as metaphors for the biggest questions of life and death. 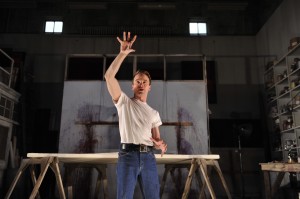 “Red” is a play about an artist who takes himself very seriously, but how serious is the play? My guess is that it’s a bit more tongue-in-cheek than the treatment director Robert Falls gives it. The Goodman’s production feels like a bulldozer, making points crushingly and sometimes crushingly obviously (for example, in nearly every dramatic moment, classical and baroque music blasts, along with operatic arias, in case you missed the import), and the humor gets lost amongst moments that don’t linger enough on the relationship between the characters when they’re not all heated up. At an hour and forty minutes, it feels like the show rushes between moments that have great potential for irony and a bit of deflation or even rest for the audience between the shouting about art and seriousness. “Not all art has to be psychodrama!” Rothko rails at one point in one of his particularly heated lectures about What Art Is, and I agree. I wish I could have seen the incredibly talented actors Edward Gero and Patrick Andrews play with a little more range of emotion, particularly some of the quieter ones. As it is, it’s harder to care about Rothko’s character, which is the entire dramatic pivot of the piece, than we might if he were allowed to be more human. Then again, that may in fact be Logan’s entire point about the portrait of the artist. (Monica Westin)