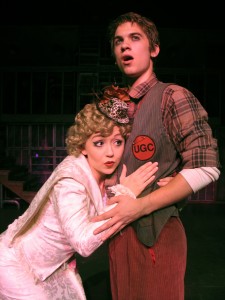 It is hard to believe that it has been nearly a decade since “Urinetown the Musical” first appeared: it was not only one of the first new shows to reestablish the Great White Way after 9/11 had brought the city’s entertainment infrastructure to a virtual halt, but it was also one of the first of what was to become a subgenre of Broadway shows, the satire musical, or musicals for people who don’t like musicals. What is fascinating about Circle Theatre’s production directed by artistic director Kevin Bellie is that it is done here as if it were a real musical, a daring and delightful idea.

Both the New York and Chicago productions were played so tongue-in-cheek that the actors’ tongues seemed as if they were swollen by the end of the first scene. The irony, of course, is that when you put this show in the hands of someone like Bellie who knows and loves musicals, the satire is actually more biting by the elements being so true to the form. Instead of a blackbox production, there are real sets here and the characters are costumed almost as if we have stumbled upon “Pirates of Penzance” roaming around Fritz Lang’s “Metropolis,” singing and dancing their naively wisecracking hearts out as they go.

Particularly effective is having a lead couple that are credible enough as a romantic interest for you to dare to care what happens to them. Yes, you laugh at some of the unlikely and sad things that occur to them and to other quirky characters in this show, which all really do seem to exist on another astral plane of music theater. I would not have thought that “Urinetown” needed revamped choreography, but Bellie makes a compelling case for doing so and in the process gives the show an energy boost that you never knew it needed. (Dennis Polkow)

Great Review. As part of the artistic team, I appreciate your view on the show. I just have one thing to nit-pick… I like to see other people’s names in the review especially if you liked their work. Of course as the costume designer I would like the credit. But I’m glad you mentioned the director since ultimately it’s his vision and I’m Proud to work with good directors with good visions, such as Kevin Bellie. Thanks again for appreciating the hard work and the joy that it is to be a part of such a fun show.