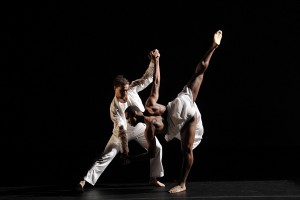 Just scanning the proper nouns of Bill T. Jones’ resume gives a glimpse into his influence in the dance world over the last thirty-five years: MacArthur ‘Genius,’ Kennedy Center, Jacob’s Pillow, Tony, Obie and Bessie, The Dorothy and Lillian Gish Prize, Wexner Prize… distinctions pepper his professional history from start to present day. His work spans genres and disciplines, from avant-garde movement experiments to Broadway musicals (most recently, a musical on the life of Fela Kuti written, directed and choreographed by Jones).

His lectures on dance and the creative process are crystalline views into the mind of a demanding artist who approaches the work with intellectual and physical rigor. The man has done a lot and, at nearly sixty, shows no indications of slacking the pace.

The Dance Center of Columbia College opens its fall season with a retrospective of Jones’ early, avant-garde work in two distinct programs, together entitled “Body Against Body.” The glance behind looks to be an emotionally intimate one: both programs feature duets from the 70s and 80s that turn the lens on Zane and Jones’ partnership.

The Columbia College engagement comes in tandem with a premiere at the Gene Siskel Film Center of Bob Hercules and Gordon Quinn’s “A Good Man,” a documentary on the making of Jones’ piece “Fondly Do We Hope…Fervently Do We Pray.” The documentary, commissioned by the Ravinia Festival in commemoration of Lincoln’s bicentennial, records not only Jones’ ambivalent and complex feelings on the project but also his tough, affectionate and, at times, volatile relationship with his dancers. Sitting in on a rehearsal has a way of reshaping and enriching the way one sees a performance. We’re given the opportunity to know the artist a bit before sitting back in the chairs to consider his work. (Sharon Hoyer)