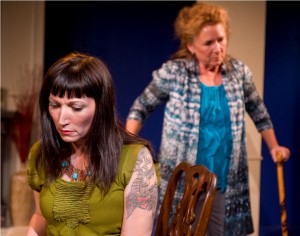 Does sex change a relationship? With not one but two movies out this year suggesting that friends can have their cake (friendship) and eat it too (uncomplicated sex), society doesn’t seem to believe it. Yet the characters in Gina Gionfriddo’s play can’t seem to have their way.

Mierka Girten plays the titular role as an office temp who comes into the lives of Max (Lance Baker), a money manager with an incisive wit and “class issues,” his adoptive sister Suzanna (Jennifer Engstrom) and her husband Andrew (Dan Granata). What begins as an honest blind date between Max and Becky, set up by Suzanna and Andrew, only serves to expose complex past relationships and threaten new ones.

The whole cast (including Susan Monts-Bologna as Suzanna’s mother) is stellar, but Lance Baker stands out if only for his sheer sardonic stamina. Damon Kiely directs a tight, occasionally brilliant show despite one or two uncomfortable, clichéd moments in Gionfriddo’s script and a few dragging scene changes. (Neal Ryan Shaw)