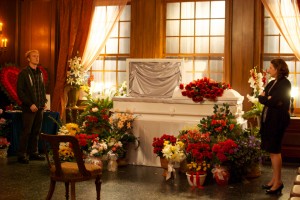 If ever there was a show in the right performance space, this is it. The domed ceiling, dangling chandelier and slightly dated grandeur of this room in the Lincoln Park Cultural Center fit the trappings of a small-town Nebraska funeral home to a T. Set designer Michelle Lilly seals the deal with an overabundance of flowers surrounding a white, open casket and a thrust seating arrangement. Brian Golden’s script, as directed by Jessica Hutchinson, is a tight eighty-minute real-time conversation between estranged siblings at the funeral of their mother—a former Miss America winner—rife with depth and double-meaning. Boxer (Ted Evans), a “hip, artsy, musician-y type” is visiting briefly from New York to help his sister Jean (Marsha Harman), a single, Midwestern mom, with the funeral arrangements. Boxer and Jean feel a bit like caricatures at first (underplayed and overplayed, respectively) but the actors quickly warm to the script and effortlessly switch between joviality and angry bickering as only siblings can. It’s clear from the dialogue that there’s more hurt (and definitely more comedy) here than this production brings to the surface, but the rapid-fire conversations and connection between the actors keep it constantly entertaining. (Zach Freeman)