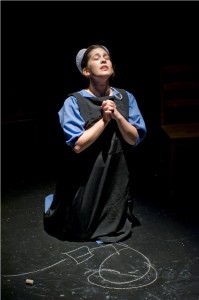 I have a hard time with the concept of forgiveness. It seems like denial of the unacceptable. I come from the Italian school of Vendetta, which stipulates that anyone who does to me and mine will bleed in the streets. Or something like that.

So I can’t understand the Amish community’s response to the 2006 murder of five young girls at a Nickel Mines, Pennsylvania Amish school. The community attended the gunman’s funeral and befriended his widow and family. They did what their faith demanded.

ATC’s simple yet mindbogglingly complex explanation of that decision is a moving testimony to the resilience of spirit and the indomitable nature of love. Sadieh Rifai captures the nuances of numerous characters; her quick changes never overwhelm Jessica Dickey’s relentlessly truthful, uncompromising script.  PJ Paparelli’s sparse staging seamlessly integrates characters at war with each other and themselves, making room for the unconquerable generosity that forgiveness brings. (Lisa Buscani)