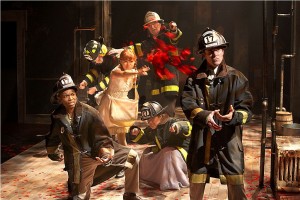 With a cast of seven handling a vast array of characters (with refreshingly little regard for gender/age/ethnicity) this remounting of John Musial’s “The Great Fire” (directed by Musial) features plenty of comedic asides, a helping of emotional depth, memorably striking choreography, a few clever musical interludes and even a hilarious miniature puppet show. Ultimately, though, these diverse bits don’t always connect properly, leaving this ninety-minute Chicago “creation myth” feeling disjointed and less impactful than it could have been. A character called “The Fire” (Lindsey Noel Whiting) creatively weaves a thread of continuity throughout, but it still feels fragmentary. Perhaps the confusion of the show can be interpreted as the confusion surrounding the fire itself, but that point doesn’t come through. The staging in the Water Works Pumping Station, one of the few buildings to survive the fire (though, as we learn during the show, the wooden roof was not so lucky), is inspired and there are plenty of impressive and surprising moments involving the set design by John Dalton. (Zach Freeman)