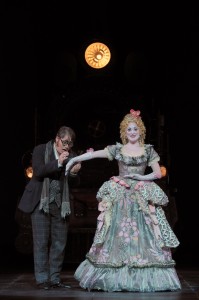 The projected translation “I stumbled on a barren landscape” received a hearty laugh at Saturday’s lavish Lyric Opera opening night, given that much of Wacker Drive surrounding the Civic Opera House is in such a state of reconstructive disarray that just accessing the Opera House became a pre-opening-night scavenger hunt for patrons, some joking aloud about what formal hard hats might look like.

It seems hard to believe that it has been nearly thirty years since we have heard Offenbach’s “Tales of Hoffmann” at Lyric Opera, first presented in 1976 and remounted in 1982. Like last year’s “Lohengrin,” which was also absent from the company repertoire for nearly three decades, it becomes a treat just to hear it again after such a long drought. And given that the episodic opera itself is framed by a party setting, it seemed oddly appropriate to perform “Hoffmann” on opening night when the audience itself is a virtual extension of the opera’s festivities.

Since Jacques Offenbach died before finishing “Hoffmann” and it premiered after his death, there was much conjecture and tinkering with the final shape of the piece. Modern scholarship has offered the “less is more” alternative of cutting sections not written by the composer, but Lyric went with the traditional version that includes recitatives, a septet and the “Diamond” Aria, all composed by others. The five-act grand opera is presented in three acts, with the Prologue and the Epilogue combined with Acts II and IV, respectively.

Taking on his first-ever Hoffmann, Wilmette native and Ryan Center alumnus Matthew Polenzani scores a major triumph in the role, exhibiting enormous dramatic dexterity while always keeping a delightfully French color to his voice. This is a more melancholy Hoffmann than we’re used to seeing, but it works wonderfully well, especially within the industrial visual look of Ezio Frigerio’s sets and the dark comedy of French director Stéphane Roche’s take on Nicolas Joel’s original conception.

Although a shopworn vocal presence at this autumnal stage of a long career, veteran bass-baritone James Morris more than compensates with an imposing dramatic traversal of all four villains in the piece. 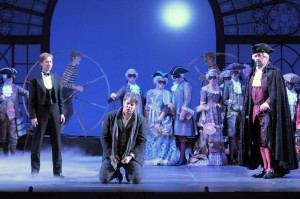 Although there was a time when a single soprano would sing all four love interests, Lyric chose to cast different sopranos given the unique vocal and dramatic qualities needed to bring them off. Although soprano Anna Christy certainly has the vocal flexibility to bring off the stratospheric singing of Olympia, her ability to act and move like a puppet trying to seem real was the true attraction. Sometimes musical line was sacrificed for comedic effect, but the audience ate it up like bon-bons.

The Lyric Opera Chorus, adjusting to a new chorus master, certainly sang well, but not yet with the punch and precision we have come to expect. French conductor Emmanuel Villaume achieved great orchestral transparency and color while always maintaining momentum. (Dennis Polkow)