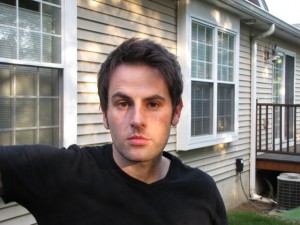 Playwright Gregory S. Moss caught Chicago’s attention when “punkplay, ” produced by Pavement Group, was the sleeper hit of Steppenwolf’s Garage Rep last spring. Moss returns to Chicago theater with the Midwest premiere of “The Argument,” a play loosely based on Katrina’s aftermath. We spoke with Moss on the oddly appropriate day of September 11 about survivor guilt, outrage and the politics of minimalism.

“Punkplay” was in part so powerful because it toed the line between overt politics and politics as a metaphor, such as when the lead character takes off his ideological rollerskates. Is “The Argument” more literal?
Actually, “The Argument” is an earlier play, but if anything it’s more abstracted. While Katrina was the inciting incident, the play could take place anywhere, and the relationship in the play—between twin sisters, one of whom dies in a flood and one who lives—is about both aesthetic doubling and generalized survivor guilt. Whereas in “punkplay” the language rides this line between a natural dialogue and natural events, a coming-of-age story within political events. To use a nerdy word, I guess, “The Argument” might be more Brechtian, with more heightened language, more theatricality, more stylization… a little more of a pageant or passion play.

How is your writing evolving and changing with these tendencies toward the abstract and the naturalistic?
I love to tell human-scale stories, but it’s hard for me to ignore that they take place in a historical context—it’s naïve to write something that seems to take place with no outside world. What I’ve been doing lately is a bit of a turn into slightly more naturalistic pieces but with less stuff, exploring how spare theater can be when economics are tight, where language is creating space. So I’m obviously thinking back to the Shakespeare model, but oddly enough there are strong politics to that. And I think a lot of the earlier stuff I wrote, even “punkplay,” written just as the Bush era was ending, came before this big change in the political scene. Back then my outrage had an obvious target, it gave me juice to write about. Now it’s harder to know where to put your attention. The Tea Party, for example—there’s a lot more noise. As an artist it’s getting harder to process it. (Monica Westin)

The Interrobang Theatre Project presents the Midwest premiere of “The Argument,” beginning October 7 at the Viaduct Theatre. Tickets and information available at interrobangtheatreproject.org