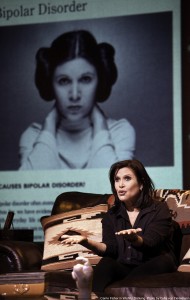 Every once in a while, I ponder the life of a one-hit wonder. What’s it like to have a big but brief shining moment in your youth and then never again do anything with an impact that comes even close? It sounds like a depressing life and, yet, few of us will ever have one such moment.

In her comedic monologue “Wishful Drinking,” Carrie Fisher answers my question when she declares that “George Lucas ruined my life” when he cast her as Princess Leia in “Star Wars” at the age of nineteen. Not that she was ever a stranger to the glare of publicity, having been born with a silver microphone in her hand as the daughter of Hollywood darlings Debbie Reynolds and Eddie Fisher, who ran away with Elizabeth Taylor, creating heartbreak for Debbie and material for Carrie.

That blueprint—celebrity life as a fascinating mess—defines Fisher. After “Star Wars,” she married and divorced the singer Paul Simon, checked into rehab, wrote a semi-autobiographical novel, “Postcards From the Edge,” married a man who fathered her daughter but turned out to be gay and, phew!, ended up in a mental hospital from which she emerged as the reluctant poster child for bipolar. It’s all material for her, and she cracks up the audience with her self-deprecating quips. But somehow the progressive sadness of her life still seeps through.

Saddest of all is the inability of this intelligent writer and raconteur to move beyond her one-hit-wonderness, beyond those absurd hair buns of Princess Leia. At one point in her show, she shares the story of meeting a clerk who confesses to thinking about her every day of his life for about a decade, “four times a day” to be precise. It’s a sign of a pathetic obsession, in more ways than one. (Brian Hieggelke)