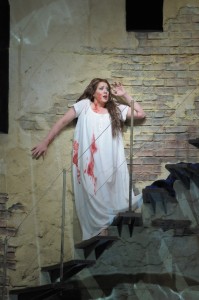 It is telling that in a series of promotional videos that Lyric Opera music director Sir Andrew Davis and creative consultant Renée Fleming made to promote the new season,  Davis admits that he is not partial to the bel canto repertoire before he nonetheless waxes on about the melodic appeal of Donizetti’s “Lucia di Lammermoor.”

The strategy for the company’s new production of “Lucia” is to depend on the vision of a former Lucia, Catherine Malfitano, to direct, apparently with the hope that the drama she once brought to the role—the actual singing of it was never her strength—would somehow translate to another portrayal and to an entire production. Would that it were so.

Instead, the end result comes off as a bewildering affair, marked by portrayals that seem detached as to what their specific character—to say nothing of anyone else’s—is doing in this opera. Add to that the odd decision to move the setting of the opera from the seventeenth century to the nineteenth century only adds to the muddle. In a director’s note, Malfitano explains that she chose this time period because that is when Donizetti composed the piece. Reasonable in theory, but the reality is that Donizetti was looking back stylistically, not ahead as Verdi would later do. (As a friend humorously put it during intermission, “Donizetti missed the Kool-Aid.”) Thus, Donizetti is as much nineteenth century as say, Puccini is twentieth century, which is to say, not much. Dress the characters up in drab costumes and kilts with murky sets and distractingly appearing set pieces and falling backdrops and the overall effect is the look of a darkly lit community-theater production of “Brigadoon” sung in Italian to bel canto music. 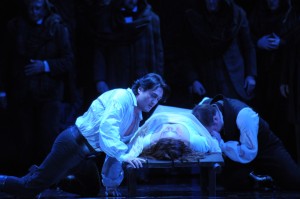 That leaves us with the singing, which on paper at least, looked like a can’t-miss, and perhaps as the production comes together to the extent that it will, this could well improve. On opening night, the performances were stiff and the performers strangely disconnected. As Lucia, Susanna Phillips looked like a deer in the headlights for most of the evening, even during the famous “mad” scene, which was played more like she was doing “La sonnambula.” Vocally, it is clear that Phillips has the instrument and technique for the role, but her sound was steely and slightly unfocused with little of the lyricism that the bel canto style demands.

Italian tenor Giuseppe Filianoti’s Edgardo fared better vocally but he was oddly detached from Phillips, so the big love duet became a cold affair. His solo moments, however, especially at the end of the opera, were the highlight of the evening, though his death scene needs dramatic overhaul. Looking and sounding as if he wandered in as the Italian tenor from “Der Rosenkavalier” having attended a Scottish costume party with his red kilt getup, green beret and colorful feather, René Barbera’s Arturo came off as a cameo.