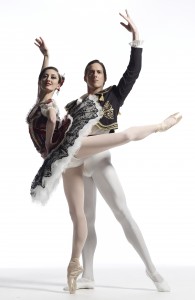 Yuri Possokhov, former principal dancer in the Bolshoi Ballet, borrows heavily from the famous choreography by Marius Petipa in his own rendering of the ingenious gentleman’s tale, but makes the title character the focal point and point of view, relegating the romance between Kitri and Basilio to the sidelines.

Puppetry and projection aid in representing the world through the mad knight’s eyes: Wendall Harrington, whose work created the illusion of sixteenth century Venetian architecture in last year’s “Othello,” projects Don Quixote’s illusory world on transparent scrims, cloaking the tangible with the dazzling light of the imaginary. Add in design elements drawn from Gustave Dore (famous for his line-etched illustrations of Dante’s “Inferno”) and Cynthia VonOrthal’s life-sized puppet of Don Quixote’s thin and aged horse and you have a full-fledged piece of theatrical, classical ballet by a fresh, new voice. (Sharon Hoyer)