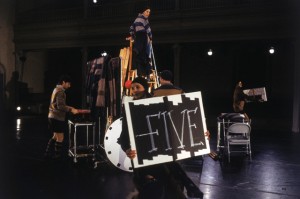 The young king of England takes his troops into France and, against great odds, is victorious. Esteemed choreographer, director and writer David Gordon, founder of New York-based Pick Up Performance Co(s), compressed the Bard’s five-act history play into an hour-long show using original choreography and his own meta-chorus character, who provides commentary on Shakespeare and our own time. Gordon also mined the recent history of “Henry V” to retell the tale of prince Hal; “Dancing Henry Five” uses iconic recordings of Shakespeare’s text as performed by Laurence Olivier and Christopher Plummer, along with William Walton’s soundtrack from the 1944 film.

Why did you revive “Dancing Henry Five” now?
It has had a life multiple times since it was created in 2004 and it was awarded this time a National Endowment for the Arts Masterpiece Grant, so there was money to put it together again. It has been an interesting piece to work on again given that it is about wars and deficit; all of that is in the original Henry and all of that is in our lives today. I thought once it was over it would be over. But then it wasn’t over.

Why did you choose Henry V as the foundation of a dance theater piece?
I was in London when the piece was first commissioned by Danspace in New York. I went to a bookstore there and found multiple recordings of speeches from “Henry V” by various terrific British actors including Olivier and Christopher Plummer. I found the music that had been commissioned by William Walton and I found an annotated copy of “Henry V”… and I bought it all. I began to look at it all and realized things that interested me, like that the wars between England and France had gone on for many more years than I understood, and the fact that countries need money and have deficits, and one way to get rid of a deficit is to have a war. I started to think about how to use Shakespeare’s text as inspiration for movement activities and how to dance to the musical voices rendering the text.

How did you find the text translated to creating movement tasks and dance?
For instance, in “Henry V” there is a scene in which the lady in waiting in the French court teaches the princess English… in French. It is essentially a duet. Here was an opportunity to create a duet for two women in both French and English to the soundtrack by Walton. Also, at one point Henry receives a gift that is meant to be disrespectful—it’s a box of tennis balls, implying that Henry is a playboy king. The idea of tennis balls, the idea of a ball game, the idea of war as competition and sport, et cetera, et cetera—each of these things lead to movement opportunities. And then there’s the battle itself and the sea voyage. These are physical activities.

How did you approach distilling the plot down to one hour on stage?
Because I have narration, I can move from the scene I wish to the scene I wish without including all the scenes in the play. Also, I think one of the things not uninteresting in my work is finding how much information I need to put forward in order for the clarity of the statement, from beginning to end, to be there. How much do we need to show for everyone to know where we are and where we’re going? Editing interests me a lot as part of creation, as opposed to a last resort.

In light of “Henry V” taking place during the Hundred Years’ War and our current involvement in a war that has lasted a decade now, has this piece taken on any different resonance for you over time?
In the earlier part of my life there was not all of the communication networks that there are now. Now you’re finding out all the time that everywhere in the world everybody is fighting everybody about some amount of turf or some amount of principle or some amount of religion. The idea of this war that gets put in motion to have more land or solve a deficit problem, it doesn’t seem so odd anymore.

We also have terminology which now names certain things which weren’t named before. The term that appears in this work: friendly fire—the idea that soldiers in our army kill each other by accident and we therefore are responsible in part for how many dead we have. Well, I say to myself… one of the events in “Henry V” is the great battle between the French and English that was so spectacular because the English went with only 2,500 soldiers, whereas the French had 10,000 soldiers. Somehow the English won and only lost 500 soldiers, but the French lost and lost 5,000 soldiers. One must wonder if the French killed each other. Those days and these days meet up in a word we now have that we didn’t then.