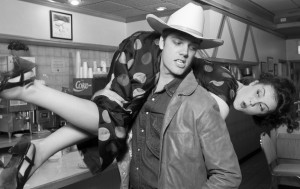 It’s a situation “straight from Chaucer,” as Jon Steinhagen’s Dr. Lyman puts it: On a dreary March evening, a blizzard closes the highway near a bus stop in rural Kansas, and the passengers on a bus out of Kansas City take refuge in the adjoining diner for the night. But it’s not just March that comes in like a lion. Cherie (Jen Short), a nineteen-year-old nightclub singer, bursts in from the bus, followed shortly by the young cowboy, Bo (Michael Stegall), she claims has abducted her.

William Inge’s 1955 classic is an exhaustingly popular play, but for good reason. The well-drawn characters that populate the diner, in the hands of the excellent cast, are revealed slowly and surely like layers falling away from an onion. Of particular note is the aforementioned Steinhagen, whose bumblingly tragic, washed-up “aesthete” (1950’s code for “gay”) with scandalous eyes for the teenage waitress Elma (Sophia Menendian) simply commands his every scene. If you want tried and true, Raven Theatre is the place to go. (Neal Ryan Shaw)