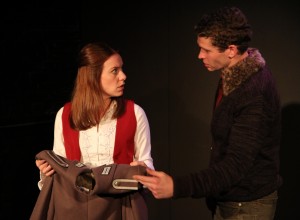 Melanie Keller and Billy Fenderson in "East of Berlin"

Signal Ensemble is presenting a double bill of plays by the Canadian playwright Hannah Moscovitch. In “East of Berlin,” a young man narrates his experience coming to terms with being the son of a Nazi war criminal. Having been told as much by a school friend in Paraguay, he then travels to Berlin and falls in love with the daughter of a camp survivor. In “The Russian Play,” a young flower-shop girl in Stalin’s Russia tells how she falls in and out of love with a gravedigger, then shacks up with a rich man named Kostya. Together, the pieces present a sort of snapshot of a certain part of twentieth-century Europe undergoing profound change. Both plays essentially are monologues with flashbacks, a device that works much better in the second. But it works because the cast—Billy Fenderson, Tom McGrath and Melanie Keller—is so charming, even if Fenderson, as the prodigal son, can some times come off as affected. If there’s one more thing that ties the two pieces together, perhaps it’s this line that the flower-shop girl uses to describe the typically Russian play she’s in: “Some laughing, and then misery.” (Neal Ryan Shaw)