by Brian Hieggelke
October 17, 2011Filed under: 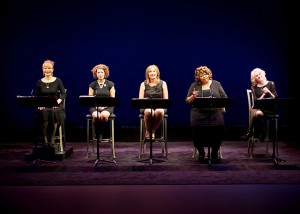 Like crashing a second-wedding shower where a handful of eloquent wits hold court, “Love, Loss and What  I Wore” is a compelling girls-night-out at the theater. Nora and Delia Ephron crafted the all-female performance piece around Ilene Beckerman’s book of the same title, which used outfits from the writer’s memory as a device to recount her life. The Ephrons added several friends’ personal stories, some humorous, some heart-tugging, along with a healthy dose of clichéd but still funny riffing on topics like shoes, closets and purses to round out the show.

The conceit is that the performers, of varying ages, races and sizes, are “reading” their stories, from a simple row of lecterns. At its best, this brings a sense of vérité and encourages banter among the actors. At its worst, at least on the far-from-opening night performance I saw, it results in a far-too-shaggy proceeding, as Barbara Robertson blew the show’s opening monologue, became justifiably distracted by the idiotic cacophony of mobile phones ringing in the audience, and restarted from the beginning. Nevertheless, once the show hits its groove, though no feminist manifesto, it delivers on its mostly lighthearted and lightweight premise. (Brian Hieggelke)