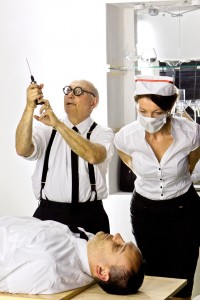 If one day you were told, all of a sudden, that you happened to be the ugliest person on the planet, wouldn’t you wonder why no one had told you before? For that matter, it would take an alarming lack of self-awareness not to realize it yourself. But that’s the logical world of “The Ugly One,” Marius von Mayenburg’s thoroughly absurd, highly German play.

The main character, Lette (Robert L. Oakes), who suffers from just this plight, decides to get a pioneering new kind of plastic surgery that gives him a brand new face and right away, apparently, all his problems are solved. Except that, when others go under the knife to get exact copies of his face, you wonder if he wasn’t better off before.

Seth Bockley directs the show with a specificity that makes the comic satire really pop. The three supporting performers, Nina O’Keefe, Fred A. Wellisch and Nate Whelden, make clear choices in each of their multiple roles that all share the same name, and at one point even a light fixture briefly becomes a character. You’ll walk into the show and puzzle at the audience seating bank opposite the stage from you, but after the show the metaphor will hit you right in the face. (Neal Ryan Shaw)