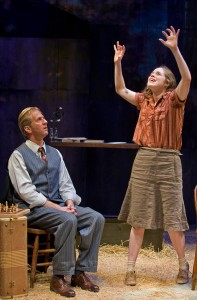 The characters in Rebecca Gilman’s adaptation of Carson McCullers’ classic novel, “The Heart Is A Lonely Hunter,” suffer in quiet desperation in their small community until two strangers arrive, one from out-of-town, one from another part of town. Drunken labor activist Jake Blount (played with rabble-rousing rectitude by Loren Lazerine) tries with limited success to rally folks toward an uprising (some of his declarations could be straight out of the Occupy Wall Street manifesto). The other newcomer, the well-dressed deaf mute John Singer (played with silent charisma by the deaf actor Robert Schleifer), plays like the fabled gunslinger in a classic Western, only here his weapon is his generosity, and his stoicism even more pronounced. That the characters gravitate toward the voiceless Singer as a sort of would-be savior (without noticing his own inner turmoil) rather than the wanna-be savior Blount reveals the author’s belief in the inevitable futility in the human condition.

The ensemble-rich story unfolds at a plotless, casual pace in the first act—I overheard a youngster telling a parent at intermission, “I get the characters, I just can’t see much is going on.” Against this steady rhythm, tragic plot developments in the second act are jarring rather than the climax of rising action, more lifelike than theatrical under Hallie Gordon’s direction.

In spite of themes involving adultery, racism, violence, homosexuality and suicide, Steppenwolf is billing this show as a “young-adult” production, likely because another central character, the fourteen-year-old Mick Kelly (played with zeal by the charming Jessica Honor Carleton), channels a youthful lust for life, in spite of the absence of her mother and the presence of the uncomfortably excessive personal interest of the diner owner Biff Brannon (played with the perfect mix of earnestness tinged with creepiness by Colm O’Reilly). The inevitable loss of her innocent optimism is more heartbreaking than the horrific acts of violence that punctuate the play. (Brian Hieggelke)