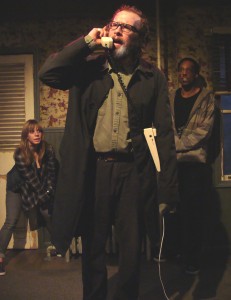 Martin McDonagh’s trademark blacker-than-black humor is a nasty giggle, and he usually manages to combine his smart bitchiness with a theme you actually care about. The themes in “A Behanding in Spokane” are underdeveloped, which makes his bitter medicine harder to swallow.

Carmichael (Darrell Cox) is hunting for his hand, severed by a band of marauding rednecks. He holds two small-time weed dealers (Sara Greenfield, Levenix Riddle) prisoner in his crappy hotel room while he searches for a hand they claim to have. The hotel receptionist (Eric Burgher) waits for revenge on the prisoners, who burned him in a drug deal.

The ensemble’s portrayals are too big for the room; there’s a great deal of hard work and heavy breathing. But the biggest flaw is the script; usually McDonagh’s weirdness is rooted in messages that speak to the human condition via the weird. Here, things are just weird. (Lisa Buscani)