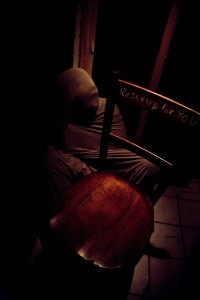 At the opening of this onstage haunted house you’re at a foreign train station late at night, the sound of trains in the distance and buzzing flies nearby. Early on you realize you’re just in the anteroom and will actually have to board the train by walking down a dark, eerie hallway. This is where the true frights kick in, with a well-developed story penned by Jeremy Menekseoglu that mostly unfolds around you but involves you too, offering plenty of uncomfortable chills from a gory plot that leaves you feeling helpless and disturbed. Immersion is key. The idea of the Women Only Train (commuter trains reserved solely for female passengers in order to reduce sexual assault) opens the door for fear of violent danger, but with the rest of the interaction staged so disturbingly realistically it spoils something to be referred to as a singular female by the cast when you’re a male in a group of four. (Zach Freeman)