by Brian Hieggelke
October 24, 2011Filed under: 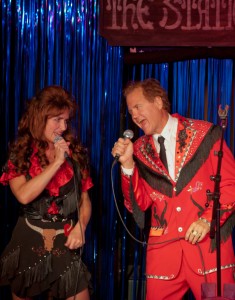 Where sullen indie rockers mope in their music and, it seems, throughout their offstage lives, country musicians seem perfectly capable of belting out song after song on stage about the most depressing subjects—lost love, betrayal,  poverty—and then snapping back to chipper patter. They never seem to confuse life with performance.

It is this juxtaposition that provides the hilarious undercurrent for the honky-tonk that’s taken over the Royal George Cabaret, wherein past-his-smalltime-prime country legend Doyle teams up with his “third Debbie,” this one a young single mother freshly discovered performing at a VFW hall. Their stories of mutual heartbreak and often deluded dreams unfold as banter between  songs, a set list that has the audience howling uproariously at unabashedly honest tunes that work so well by pushing familiar themes into (just barely) unfamiliar territory, like “When You’re Screwing Other Women (Think of Me).” The catchy melodies and sharp lyrics are delivered by a couple of terrific country singers without a trace of the hipster irony that would have ruined the show.

Show creator Bruce Arntson’s Doyle is a charismatic ringleader, and while he does not have an operatic voice, he impresses with a vocal range that includes yodeling and a sort of country rapping. (The show sags a fair bit during his over-the-top  “Daddy’s Hair” bit, which probably just killed with soused patrons when the show was a hit in its Nashville bar run, but not so much with the more  sober grayhairs at the Royal George.) Jenny Littleton not only has the voice of a country star (and the material here to use it), but she really nails the downhome naif persona.

In spite of early reviews likely overwrought by expectations greatly exceeded,  this show won’t change your life. But unlike so many “hits” reaching Chicago from smaller markets only to flatline here, “The Doyle & Debbie Show” won’t let you down either. (Brian Hieggelke)