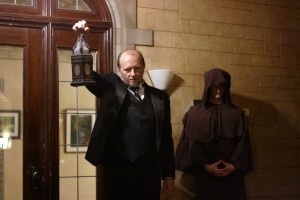 Anyone who grew up in the western suburbs since the 1920s knows about “Peabody’s Tomb,” as Mayslake was referred to for decades. The sprawling, wooded estate was built by coal baron Francis S. Peabody who died suddenly on the property while hunting in 1922 and was buried in an ornate chapel built right on the spot where he fell.

Peabody’s thirty-room Tudor mansion became a Catholic retreat house run by the Franciscan order called the Mayslake Retreat Center. But the mansion and surrounding property was considered haunted and it became a common dare to sneak onto the property and get a glimpse of Peabody in his glass coffin, urban legend said, with his money surrounding him, but not to be caught by the monks who monitored the property and who would make trespassers pray on their knees on a cold floor all night in the chapel.

“Searching for Peabody’s Tomb” takes all of this local lore and turns it into an interactive tour through the memorable mansion itself in search of the tomb of the man who occupied it some ninety years ago now.

A butler and a maid greet a handful of visitors for a thirty-minute walk-through of the property, filling in the details of who Peabody was in a subtle piece of performance art. Along the way visitors encounter residents of the mansion’s past, including Peabody family members and hooded monks who used to run the property when it was a retreat house. Sometimes these are seen in the distance as ghostly phantoms, sometimes they occupy darkened doorways or hallways and seem as curious about property trespassers as visitors might seem of them.

This brilliant idea is cleverly written and acted, but the experience is in need of more attention to specific scenic detail. The old library, for instance, has only empty shelves and hardly looks lived in, even by spirits. Contemporary hallway art prints and paintings complete with price tags on them also shatter the illusion. The most startling effect, where ghostly phantoms can be seen wandering across the upstairs sunporch is almost worth the trip, but there are too few such creepy diversions.

Nonetheless, with none of the cheap thrills and startling scares so associated with this time of the year, this show offers a viable, atmospheric and civilized alternative to the more usual hyper-for-its-own-sake Halloween haunts. (Dennis Polkow)