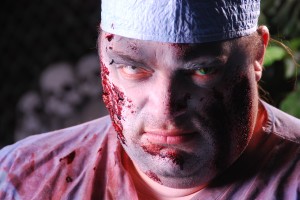 After its debut performance last year at the Odeum Sports & Expo Center in west suburban Villa Park, the Asylum Xperiment is back for a second jaunt in what is shaping up to be an annual Halloween tradition.

The Asylum Xperiment is a post-millennial incarnation of the short-lived but never-to-be-forgotten Asylum Experience in Berwyn in the late 1990s, a haunted house unlike any other that was steeped not in shock and gore, but in imagination and creepiness. The lines would run around the block at this time of year, surrounding the Victorian tower with a hearse in front of it as the lucky elite who were ushered in were slowly treated to disturbing and eye-popping scenes from room to room that were exquisite in their macabre detail, courtesy of Dave Link.

Link is a sculpture and design professional who creates movie-themed designs for the likes of Lucas Films, Disney, Sony Pictures and Sega, and has an uncanny knack for creating lifelike characters and creatures which are then brought to life in animated vignettes and combined with live actors who are specialists in contortion, mime, performance art, minimalist deadpan dialogue and creepy improvisation that never breaks character. 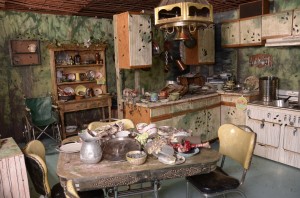 The Asylum Xperiment is Link’s first Chicago-area haunted house venture in over a decade, and has taken up residence at a venue that was long associated with such legendary haunted houses as Hades and ScreamFest.

The end result is that Link now has unlimited space to extend the impact of some of his old haunts: fans of Asylum will see extended versions of scenes associated with the old Berwyn venue but get a better look at the astonishing detail of Link’s creativity, and there is more room for the ghouls to roam and lead you into new terrors. In fact, it is a real tribute to Link’s work that sometimes the real ghosts look less real than the automated ones.

Unlike the Asylum in Berwyn, the Asylum Xperiment does now incorporate some standard haunted-house clichés such as chainsaw-bearing would-be killers, pop-out creatures and long, narrow dark hallways and mazes, but even these are given Link’s special touches where you are suddenly exposed to poltergeist cold spots, squishy stuff at your feet and, every now and then, you enter a passageway that gently but firmly closes in on you. But it is Link’s amazing scenarios that most dazzle, and there are more of these than ever were possible in the cramped corners of his former space. (Dennis Polkow)